All Events  ›  Jackie- my parents are from Jamaica and I was born in England. First time in Carnival !

Jackie- my parents are from Jamaica and I was born in England. First time in Carnival ! 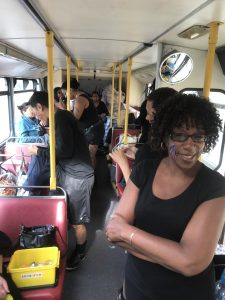 One Saturday afternoon I attended a course at S.I.A and subscribed to their mailing list, so that I could be notified of any of their up and coming events.

I received a newsletter in June, and I noticed an article regarding volunteers required in July to help with ‘Mas Camp’. As I had booked a day off in June for an appointment which was subsequently cancelled, I decided to go to S.I.A in Brixton, to find out some more information.  I met with Ray the owner and he gave me some background information regarding the history around carnival, and how he had to think up a theme and what the costumes would be like each year for carnival- it was a real eye-opener.  I did not realise just how much work was involved.  Ray then asked me ‘would you like to take part in carnival?.  I remember looking at Ray and asking him ‘me, take part in carnival?’  He said yes why not, it’s a great opportunity!  Next thing I know, I had agreed to take part and was deciding what costume I would be wearing. 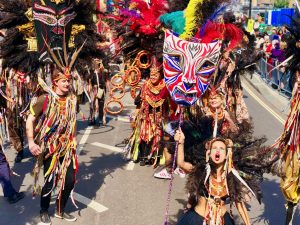 When Mas Camp started in July, whenever I finished my day job and when S.I.A had their late nights, I couldn’t wait to get there, meeting up with other volunteers, the staff, and helping out with making the costumes – I really enjoyed it, it was therapeutic, and the time went quickly.  I also did some volunteering on some Saturdays too.

In the run up to the Carnival weekend, arrangements were made as to how the participants would get to the Carnival.  I was taking part on the Monday and decided to get on the minibus leaving S.I.A   I had to reach by 6 am😏 so that we could leave by 6.30. This was to make sure that we missed the traffic on our way to Notting Hill and got to our designated spot so that the relevant checks could be made, because if we had missed our slot we would not have been able to take part! I think we arrived between 7.30-8.00am , we were due to join the carnival route around 11.00am. During the wait, I had my face painted, which was another first for me, and chatted with the other Mas Camp volunteers in the team, and then around 10.30am, as I was already in my costume, I helped some of the other volunteers with heavier costumes, put theirs on and we joined the procession.  From the beginning, the atmosphere was fantastic, in front of the minibus to the music with the other volunteers in my camp as well as the revellers, along the carnival route, whilst having a shot of rum every now and then.  I even saw members of my family and friends too, couldn’t believe it-out of all the millions of people who attended!! Mind you, I had given them the name of the float that I was on, so that they could keep a look out and I guess that helped.  I had aimed to do the whole route,  and we were about an hour away from the end, (I think it was about 6.00pm) when the police stopped the carnival due to overcrowding. It was such a shame, but at least I was able to go and sit down and rest my aching feet and have something to eat!!

The minibus subsequently made its way through the crowd and back to S.I.A in Brixton. Ray invited us in for drinks, some of the volunteers declined as it had been a long day and they wanted to start making their way home.  The rest of us, myself included stayed, had a chat, and a few drinks. After a while, I said my goodbyes and made my way home.

Thank you Ray for giving me the opportunity to take part in and experience this well know event, one which I had attended as a reveller for many, many years before.  I will never forget it!!

Jackie- my parents are from Jamaica and I was born in England.