How Did i Become a Carnivalist? DE MIDNIGHT ROBBER – Celia Burgess Macey

This is quite a long story. My first exposure to the culture of carnival, and of Trinidad in particular was in 1964. I was at university at Bedford College London University which was situated in the middle of Regents Park. At the end of the summer term our college ball was held outdoors in the College grounds and the music was provided by a steel band (in all likelihood this was Sterling Betancourt as there were not many steel bands operating commercially in 1964). I remember thinking that the music was magical, resonating in the warm Summer night. I had never heard of music like this. 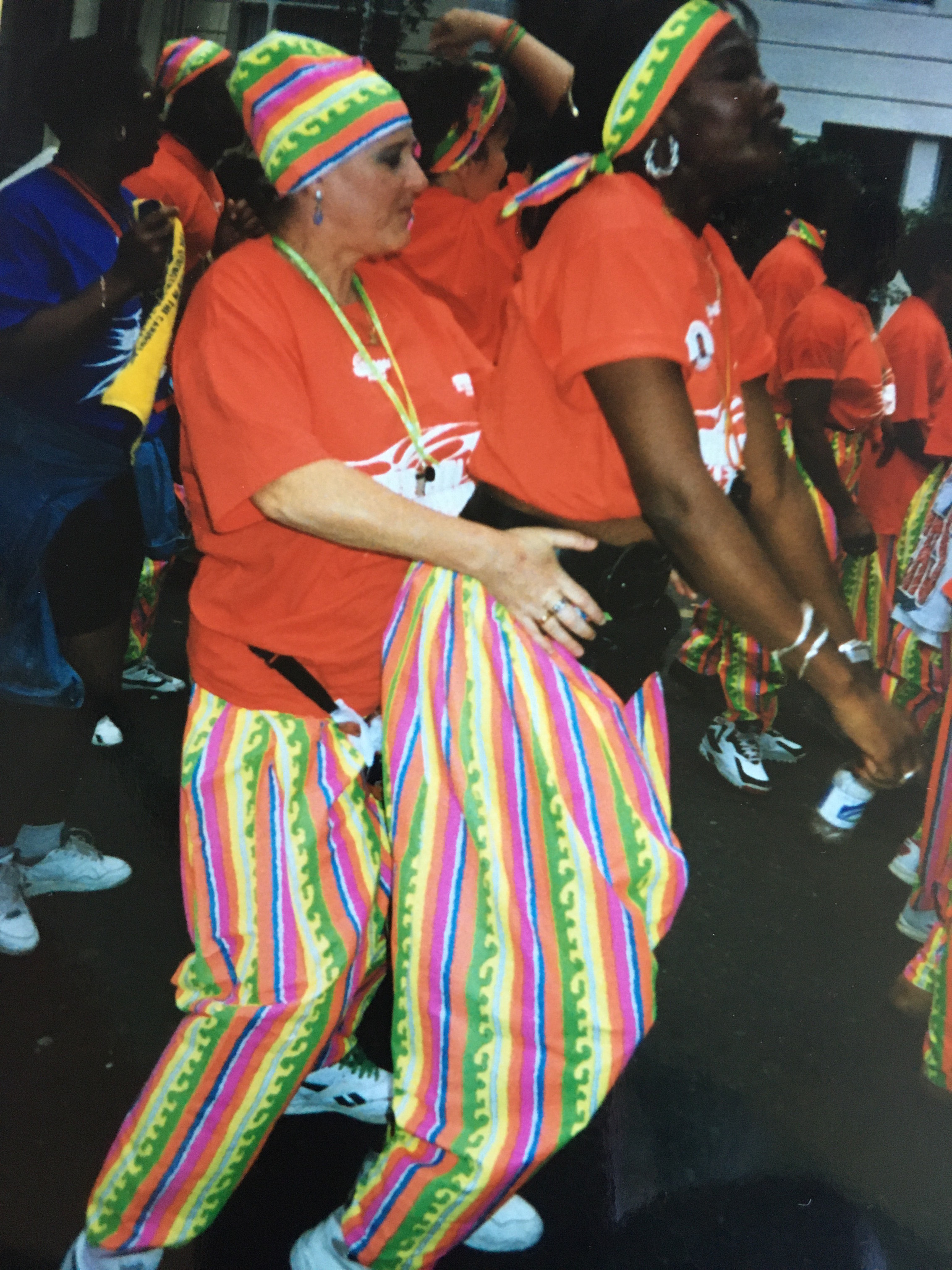 In 1967 whilst a postgrad student at the London School of Economics, I went to work on summer holiday play project in Geneva and Somerleyton Road Community centre in the middle of Brixton. There was a youth club attached to this project which I helped to run, serving Coffee, playing table tennis and Dominoes with the teenagers and encountering Ska Music at their dance sessions. The clientele was more or less 100% Jamaican. That was where I first learned how to move to the reggae beat!

During the 1970s I began to attend Notting Hill carnival as a spectator and again encountered steel bands on the road. The beat was infectious. You just had to move your feet. By this time I was a primary school teacher, teaching in Hackney where I was also living. As part of the Inner London Education Authority initiative to introduce a steel band into school, the school had employed a pan maker and tuner called Speedy, who had grown up on Clifton Hill in East dry river, Port-of-Spain. I got to know Speedy well as I taught his daughter Michelle. 1975 was a very significant year for me. One of the teachers invited Speedy to her birthday party and he brought along his friend and neighbour from Clifton Hill, Neil Macey. And that was how we met and fell in love.

By 1980 I had separated from my partner, Tanya’s father. She was 2 years old. I met Neil again and we have been together since. In 1983 Neil took me to his family home in East Dry River Port-of-Spain. This was the heart of steel band country and his uncle John was a founder member of the steel band fraternity, setting up and arranging for his own steel band called City Symphony. (He has written his own account of this in a book entitled “Steelband-my life and times with it”). Uncle John was passionate about music of all kinds including opera and classical symphonies, and had often arranged classical tunes for the steel band. He had a large record collection of imported records. He took me to my first Panorama and I was privileged to sit with him in the special enclosure reserved for founders of pan. There I listened in awe to all the old talk and discussion of the merits of different steel band performances. That was an education. Later I recorded John talking about the early days. I have the tape somewhere!! He visited us in London in 1989 and went to visit his old friends Boots Davidson and Sterling Betancourt. I was working so could not accompany him but Neil went and said they spent the whole day reminiscing about old times. That would have been good to record! 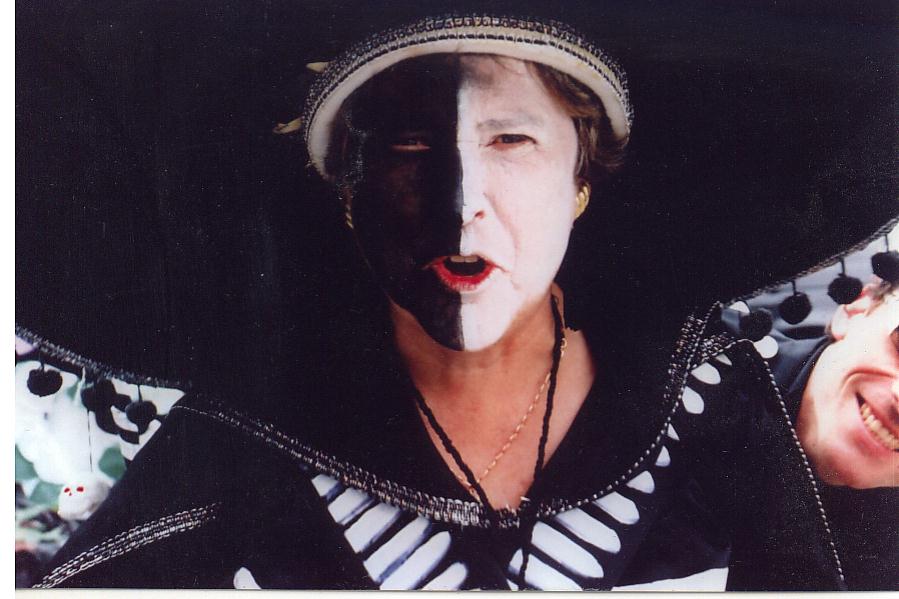 It was carnival time. Whilst I was walking up Frederick Street I was accosted by an old man and two children all dressed in Robber costumes. He looked me straight in the eyes, displaying a knowing twinkle, and held me at gunpoint while he recited a long dramatic speech. I was quite astonished and Neil who was laughing told me I must pay him a dollar otherwise he would continue. So I did this and then turned to the children and asked them if they were going to challenge me too. To my delight they immediately performed their speeches and also got a dollar. And that was my first meeting with a Midnight Robber.(3 in fact)

Of course we went to see the street parade on Carnival Tuesday. Peter Minshall’s band were particularly impressive, there was a costume shaped like an atomic bomb and lots of very dramatic and scary costumes. The most dramatic of all were the Moko Jumbies, who were all dressed in black with long flowing sleeves. As a large group of them advanced down the road and across the Savannah towards the carnival stage, the hairs literally stood up on the back of my neck. I was hooked. This was more than fun. This was passion and spirit. This was life and death. 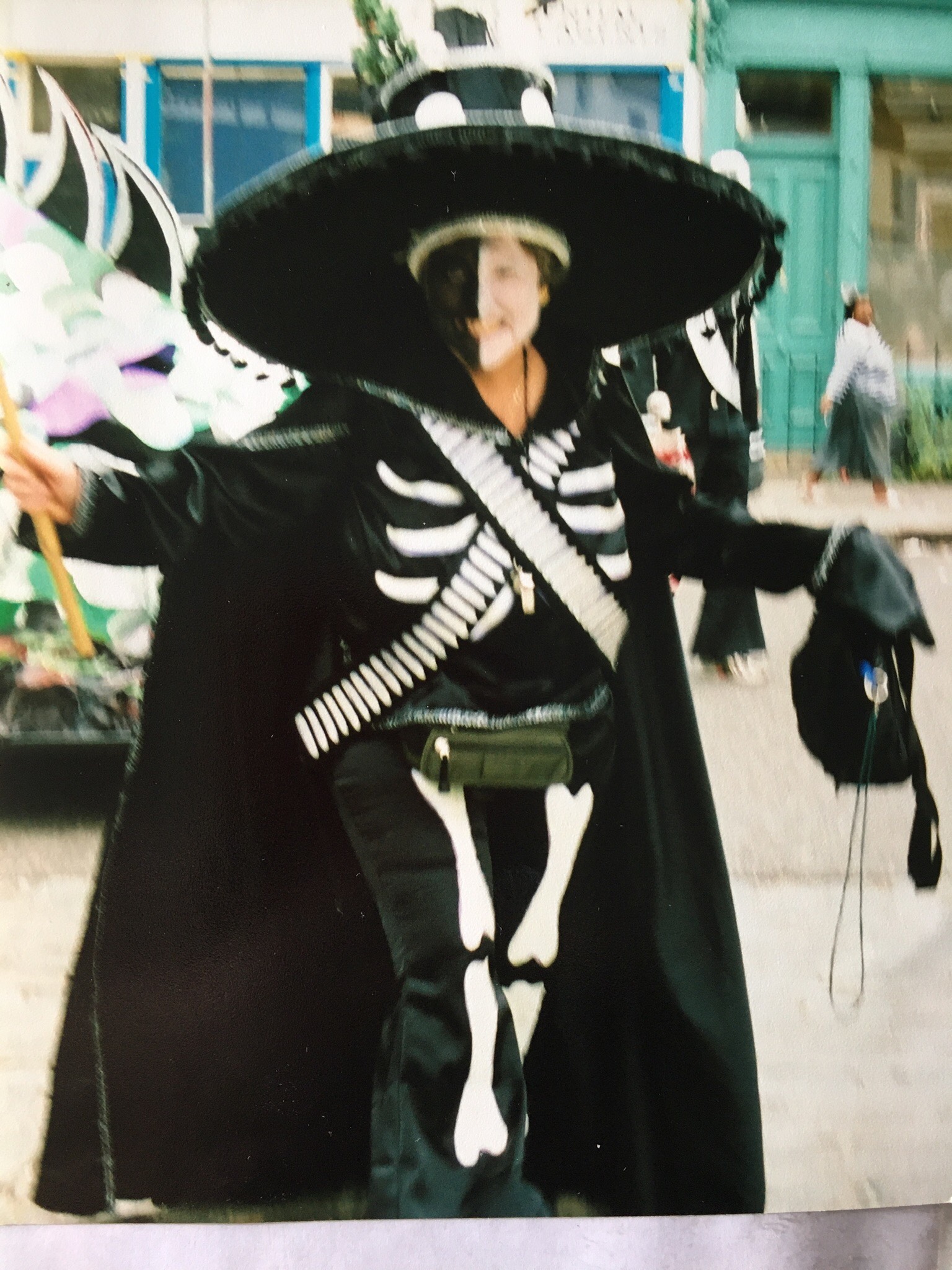 The Midnight Robber is a complex character whom I have encountered in a variety of settings.

He sounds like a character from Shakespeare. My mother who had been a Shakespearean actress used to recite Shakespeare to me from a very young age. The Midnight Robber is larger than life. He is scary like the monsters we were scared of in the stories and folk traditions we imbibed as children.

My father worked in a felt Hat factory. His job was to test the hats for weatherproofing and the stability of the dyes. He used to bring all kinds of hats home and many of them ended up in our dressing up box. A large black Mexican cowboy hat was the particular favourite of mine. When I was a young and flamboyant student in the 1960s I used to wear this hat accompanied by tight-fitting black velvet trousers from Carnaby street and leather boots. I also had a cape. I was anticipating the Midnight Robber.

The oratory I grew up with in church and in politics. So I try in my speeches to capture something of the power of words. I try to use those words to describe cataclysmic events, the beginning and end of worlds. I try to use the speech to accuse people in power and to speak truth clothed in metaphor. It is not hard to learn the speech by heart, but it is hard to recall it under the pressure of performance in front of the carnival judges! 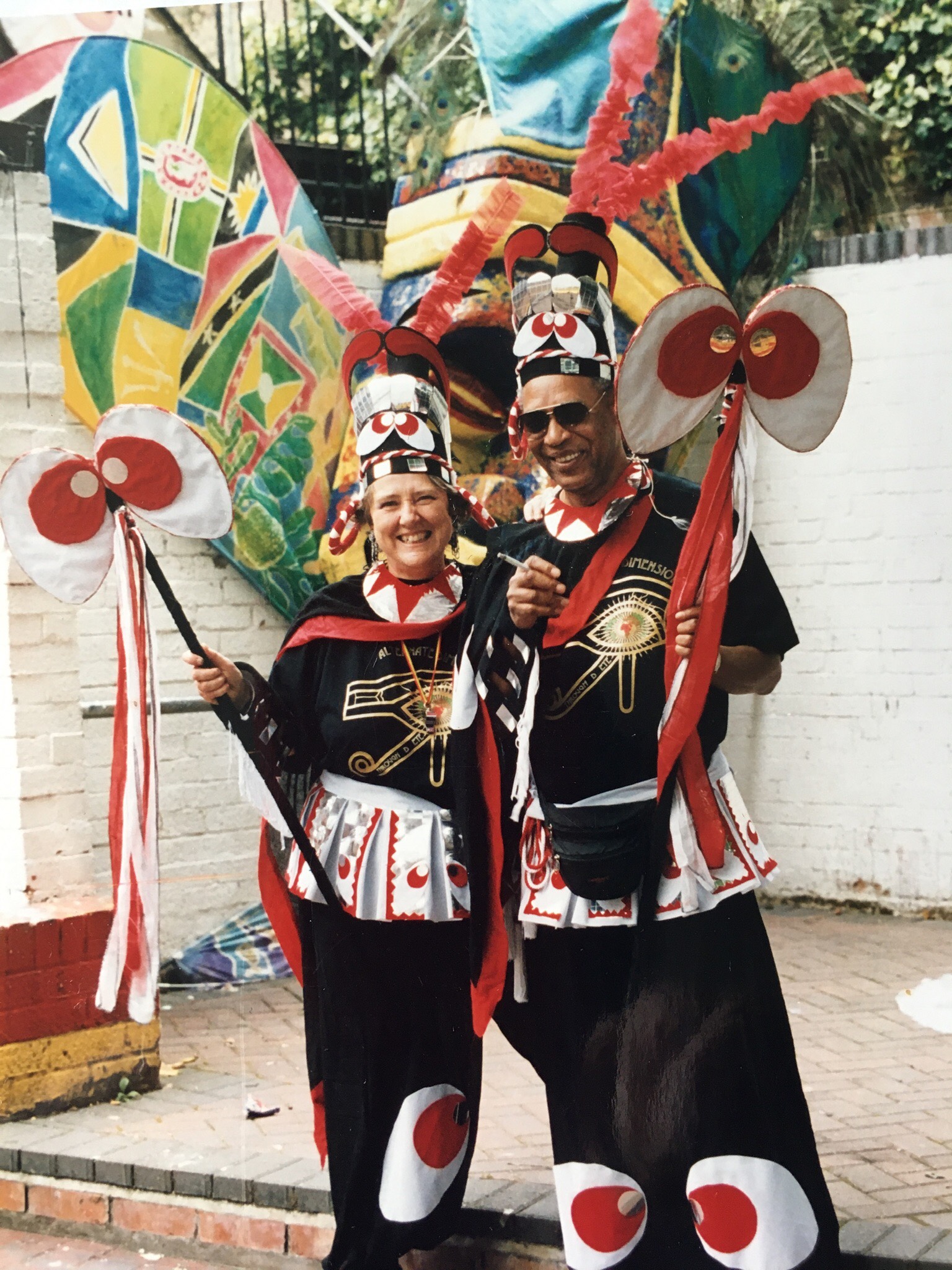 Neil joined this band and in 2002 he and I played a Fancy Sailor for the theme Tru de Eye, and in 2003 he played Sailor while I played a Midnight Robber. Whilst I love playing mas in the band with Neil chippin down the road together, it was more difficult to stay in character when his presence constantly reminded me of my real life self!

My own practice as a Carnivalist has continued to develop and now also includes sometimes being a judge for Notting Hill carnival, a volunteer role and privilege which I take very seriously but it is also great fun and gives me a wonderful view of all the bands as they pass the judging point. My friend Karen suggested that we should join Sunshine International Arts for the Thames Festival Parade. In this way we would find out if we liked the band. We played in the Thames Festival for two years and joined the band for Notting Hill carnival in 2012. 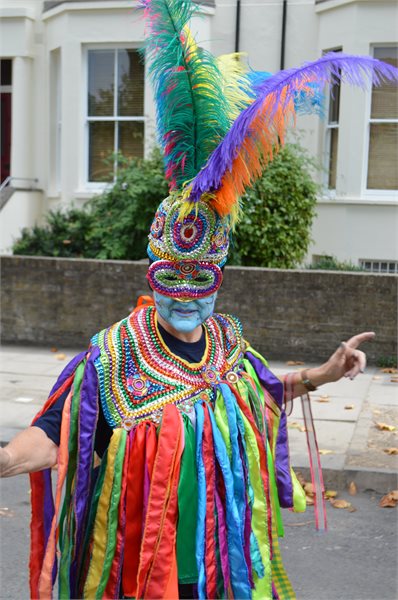 Celia as Pierrot Grenade with S.i.A 2016

This band has suited me because the bandleader, Ray Mahabir, is an experienced Trinidadian mas designer and committed to preserving and developing the art form that is masquerade. The band is community-based and committed to using carnival to enhance lives. The band plays serious and meaningful themes and as with Yaa these often have a historical or political aspect. The costumes always beautifully crafted with lots of attention to detail and fine materials. The band’s artistic practice is grounded in the traditions of Caribbean Carnival, including the traditional characters that I so love. I was delighted when Ray suggested that I could play Midnight Robber. I was even more delighted when he agreed that I could write my own speech.

It is in this band that I have been able to grow into my character, whether Pierrot Grenade or Midnight Robber, because Ray has given me the artistic freedom to do so. I enjoy my day on the road and the reaction of the crowds and the scared faces of children shrinking behind their adults. That means my mas is connecting. This is a far cry from pretty mas and the crowds need to know that. The knowing smiles of elder Caribbeans who recognise Robber are also noticeable. Ray has also welcomed Neil into the band and in his fast advancing years he has been able to reconnect with the carnival character most associated with his family and his own youth, Sailor mas. This has given us both particular pleasure.

In 2019 we decided to go to Leeds carnival as we had never seen it. It was an enjoyable experience and an intimate family event but lacking the excitement of Notting Hill for us. I took my Robber costume and joined in their J’Ouvert but got very little feedback. It was only later I realised that since this carnival was grounded in St Kitts carnival maybe they do not have Midnight Robber there. Or maybe the sight of an old English lady playing Robber was just too strange. There was a black on black murder on the evening before carnival so my Robber speech was on a placard

This Robber weapon is rhyme and rhyming is no crime.

And on the reverse of the placard it read 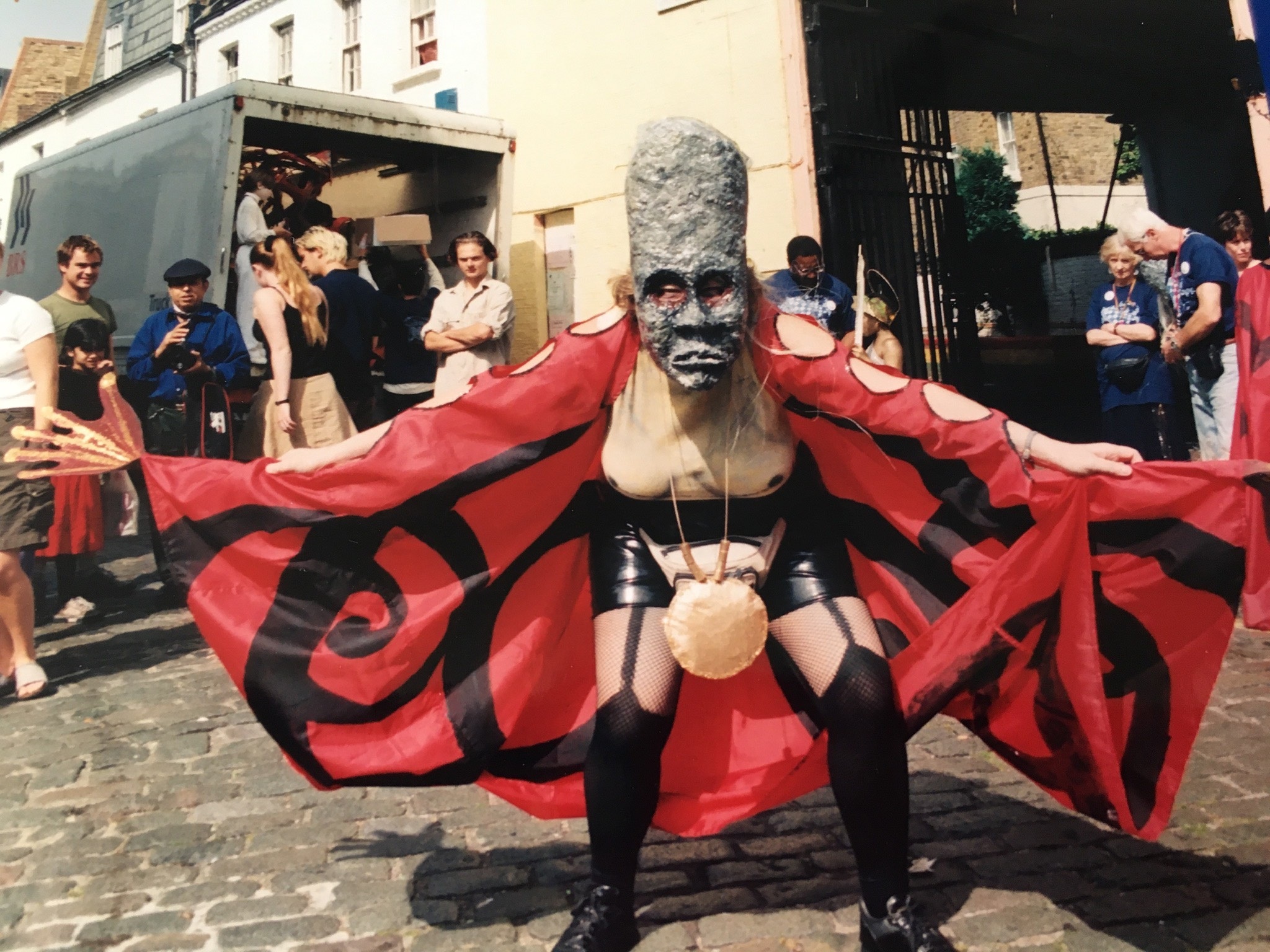 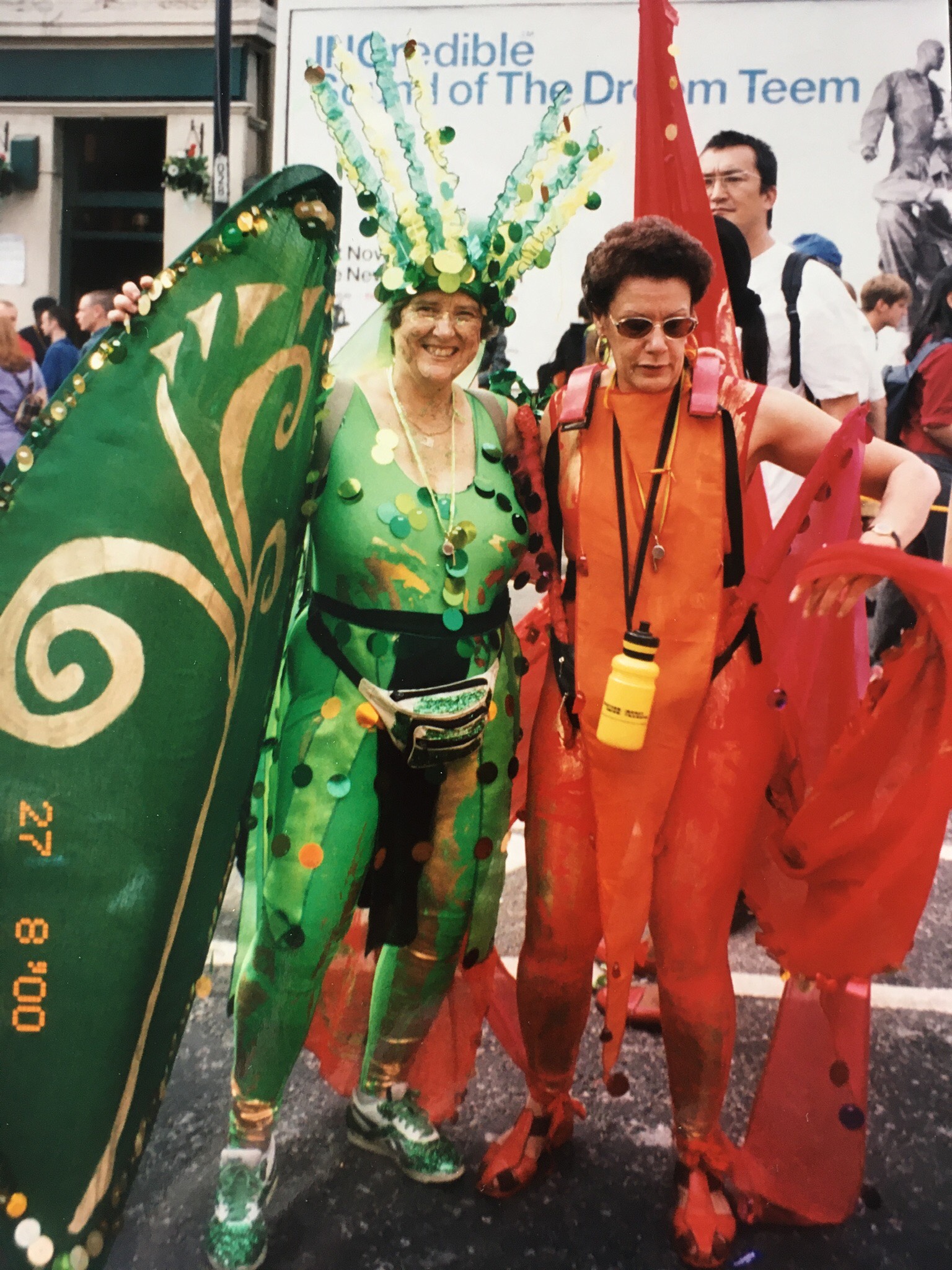 Movement Of The People for Yaa 2001

2001 – Movement of the people-Yaa African 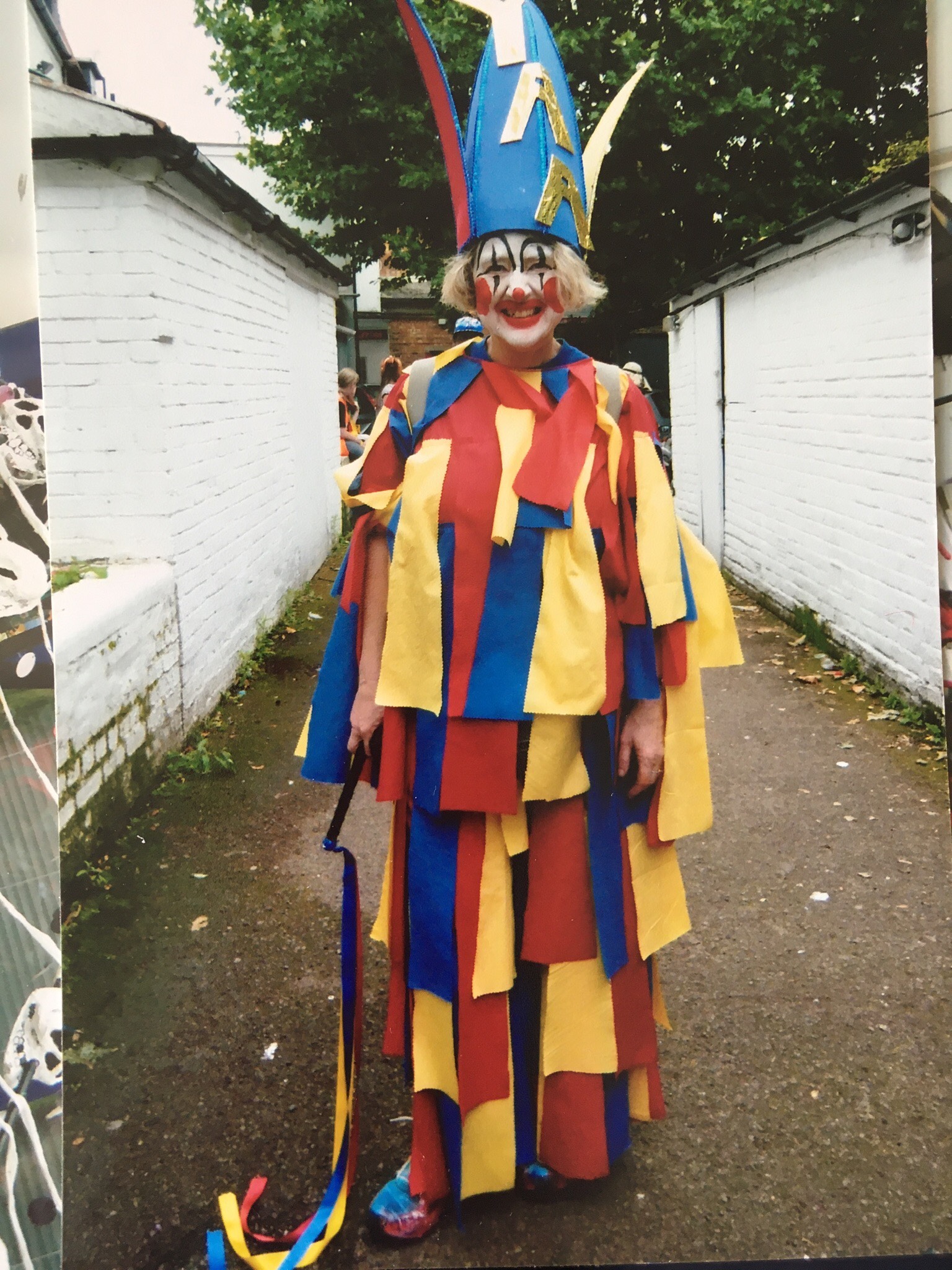 2017 – Death of carnival (Me Midnight Robber and Neil Sailor) 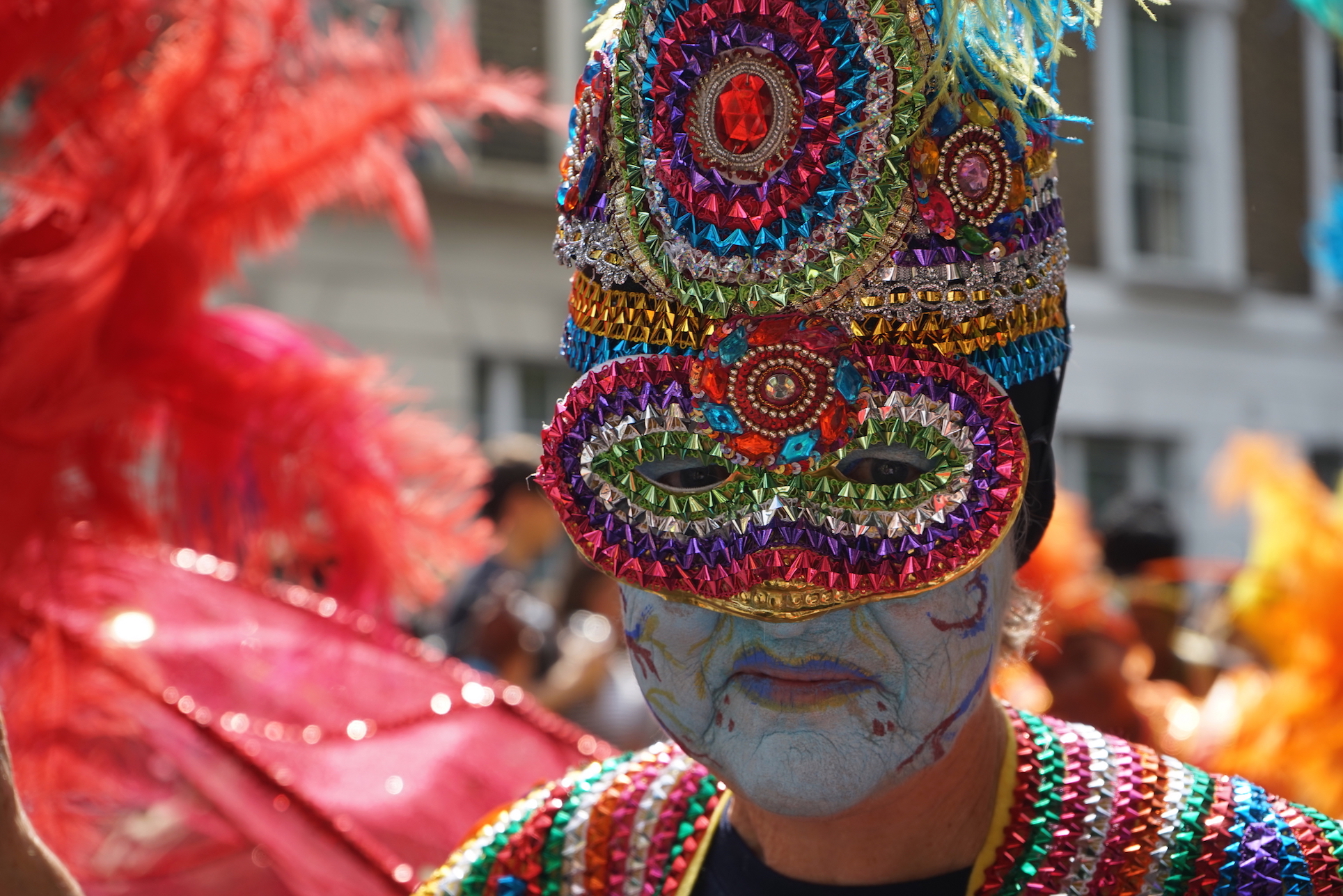