‘THAT’S IT! Look how things come to me! Look how many donkey years that is and it comes to me!’ Avion Mookram 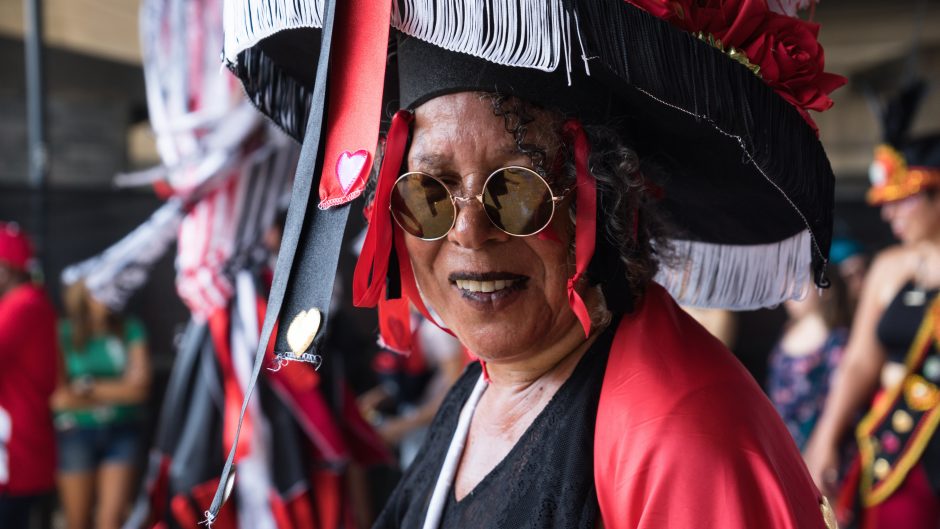 Thursday 17th January 1958, A bitterly cold, grey day. The S.S Camito docked in Southampton, bringing the Princess Royal back home from the Caribbean. On board was a young 17 year old Trinidadian, along with a few other passengers.

My application for nurse training in the U.K was accepted and I was given a date for starting my training. I was required to be at Lambeth Hospital by the end of January 1958. I was met at Waterloo station by U.K reps and taken to Lambeth. After being introduced to Matron and taken to “my room” I sat down and cried my eyes out. It was, to put it mildly, scary, bewildering, overwhelming and daunting. Entering a big new world all on my own at the age of 17 (which in those days was really like a 12 year old!) 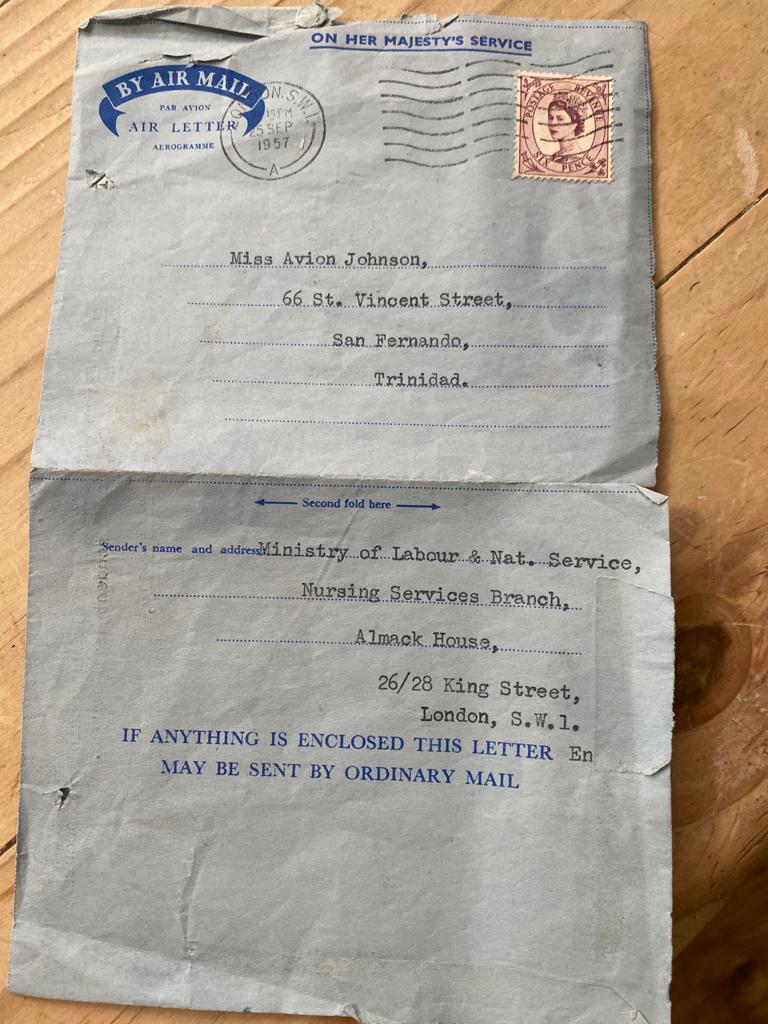 The following days were particularly difficult for me as I remained homesick for much of the time. I truly missed everything I was brought up with in Trinidad and Tobago (T+T), and especially ‘The boyfriend’ I left behind – We were childhood sweethearts and we grew up on St Vincent Street San Fernando (South Trinidad) in houses facing each other, his name was Conrad Mookram (Con).

My interest and love for carnival went way back to my early years growing up in Trinidad. Where my mom and dad as mayor of San Fernando were heavily involved in the management, promotion and production of everything around carnival. My mom was especially concerned that all children were included and I have fond memories of her cutting up her dresses, dismantling whatever she could put her hands on and making all those pretty outfits for the boys and girls of our community. These were the years she taught me machine sewing, cutting and at 8 years of age I became “A Mas Maker’.

I remember Carnival Monday/Tuesday February 1954 at age 13/14 I was allowed to ‘Play Mas’ on the road in the Sea Bees Steelband portrayal of “Sailors on Shore”, dressed up in my sailor outfit. I have never looked back. At the end of my three year training I qualified as a state registered nurse. Unbelievable! – ‘the boyfriend’’ I left behind followed me to London and we were married on the 18th April 1986, having cut and sewn up my wedding dress on an old hand machine in the nurses home.

After getting married we had problems getting accommodation to live as in those day people just shut the door in your face because of no black here! We were lucky to have someone in Balham who was Polish and said “ok come in then” and here is where start our married life in Ritherdon Rd, Balham London. THAT’S IT! look how things come to me! Look how many donkey years that is and it comes to me! 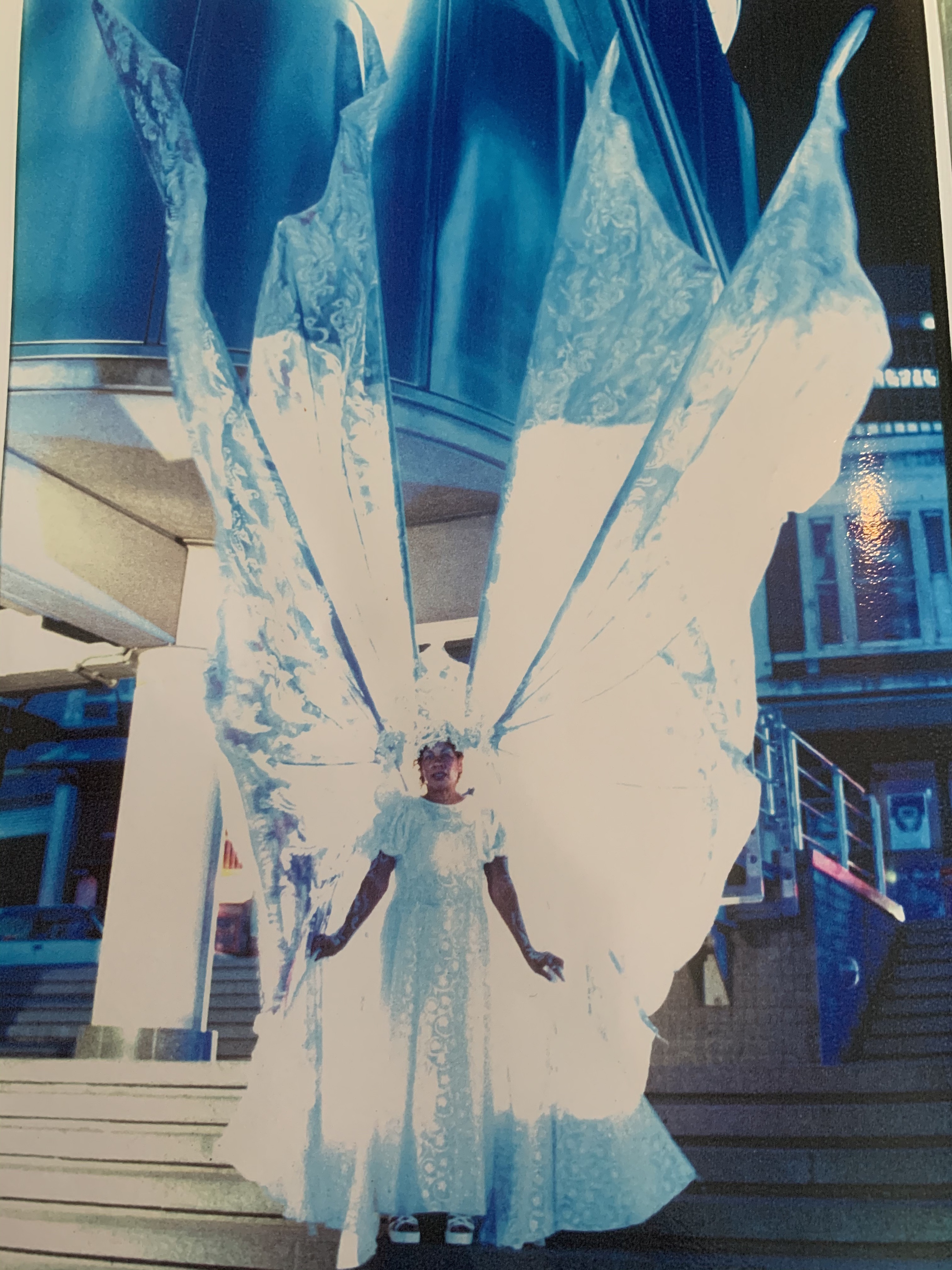 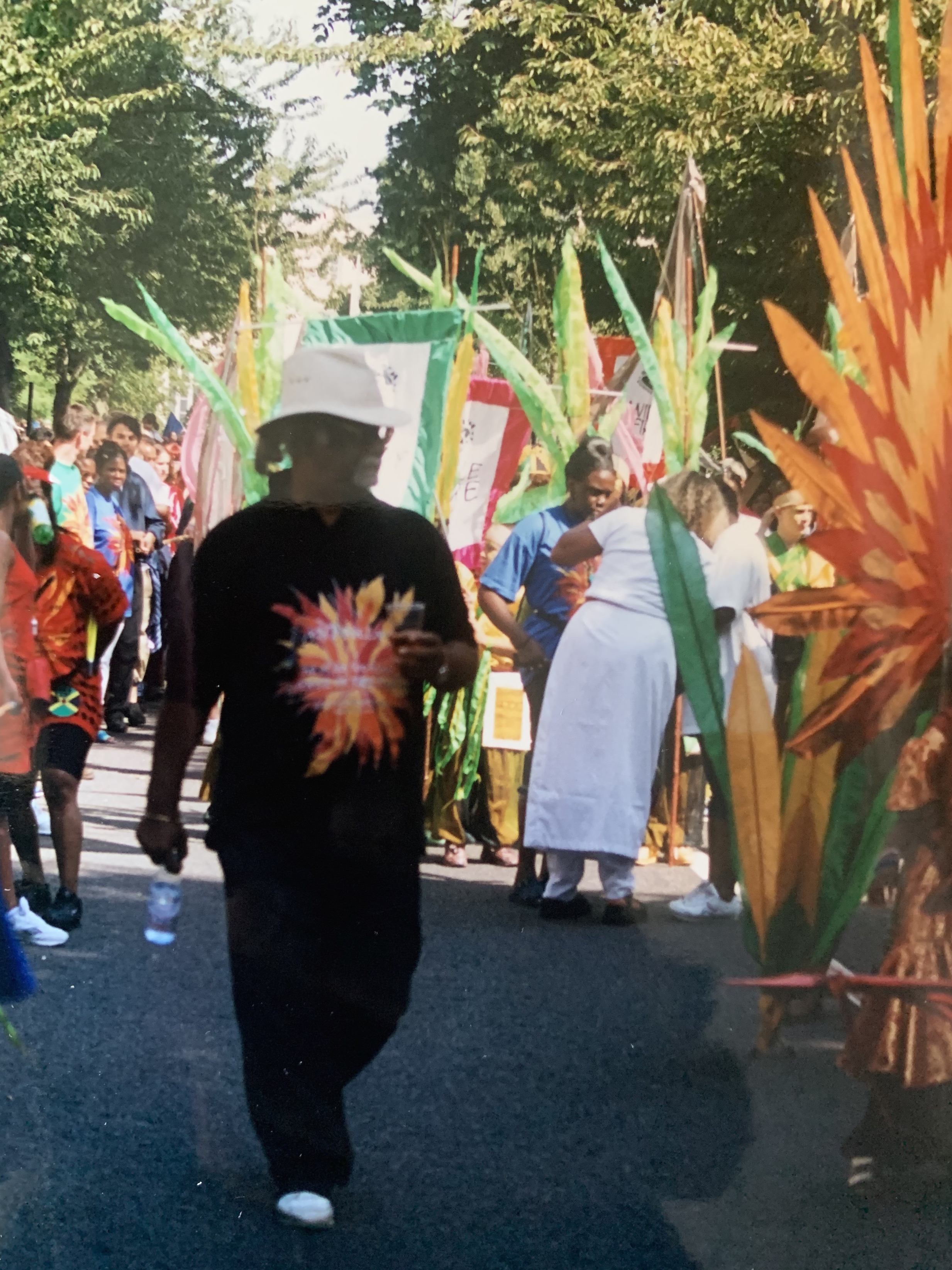 Con got a job with Decker Co the electronic company, they were a TV company. Married life blessed me with 5 children in almost as many years. I continued my nursing, it was what I wanted to do, and worked hard nursing and bringing up my 5 children. It really was hard work not knowing a granny or auntie or cousin to help out.

It was important for us that our children learnt the culture of carnival and Trinidad, we took them back to Trinidad in the following years I remember dressing my five in the T.V characters for children (Andy Pandy, Thunderbirds and The Magic Roundabout) and taking them to be a part of the carnival. We took them religiously every year to carnival. 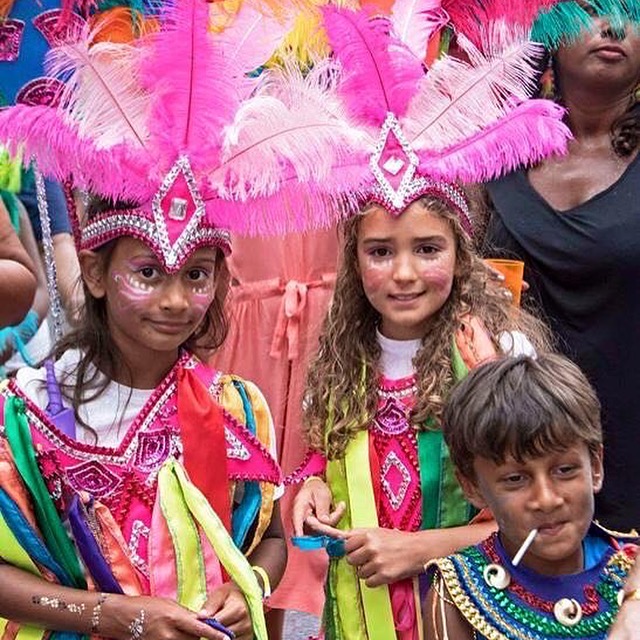 Avion’s Grandchildren and their friend Playing Mas with S.i.A

One year that sticks in my memory of NHC was 1976 we were all having a great time the children were dressed in their costumes when everyone started running there were screams and shouting bricks and bottles being thrown everywhere, we had to run for our lives all five children Con and myself. RIOTS in Notting Hill ! Fires and fire engines, ambulances, police men in their hundreds  and everyone running for their lives, we looked back at that event and how we were lucky to get out of that event safely but most of all having the five children safely in the vehicle heading for home.

Con became friends with a Trinidadian guy who was the partner of Nikki Lyons, a designer, and was working in Carnival at the Ovalhouse – South London. There I also met Roz Price who was heavily involved in carnival. With the ambition and skill of Niki Lyons, a well known designer and someone with good experience with the arts, and Roz, we got together and formed a committee, then known as Oval Lyons. Headed by Niki and a few friends, Roz was the main contact for Ovalhouse where we were allowed use and given space there to produce the band. As I grew more and more able to dedicate some of my time to being involved in Carnival, the production of my own band was of interest to me.

What a moment that was when the band hit the road. We were all dressed up in large and medium sized costumes topped with backpacks. The band was well supported and the numbers grew and grew. We continued producing band after band, winning top prizes and becoming more and more popular with the communities in London and the suburbs. There was quite a range of cultures, and together we feted all day and had so much fun. 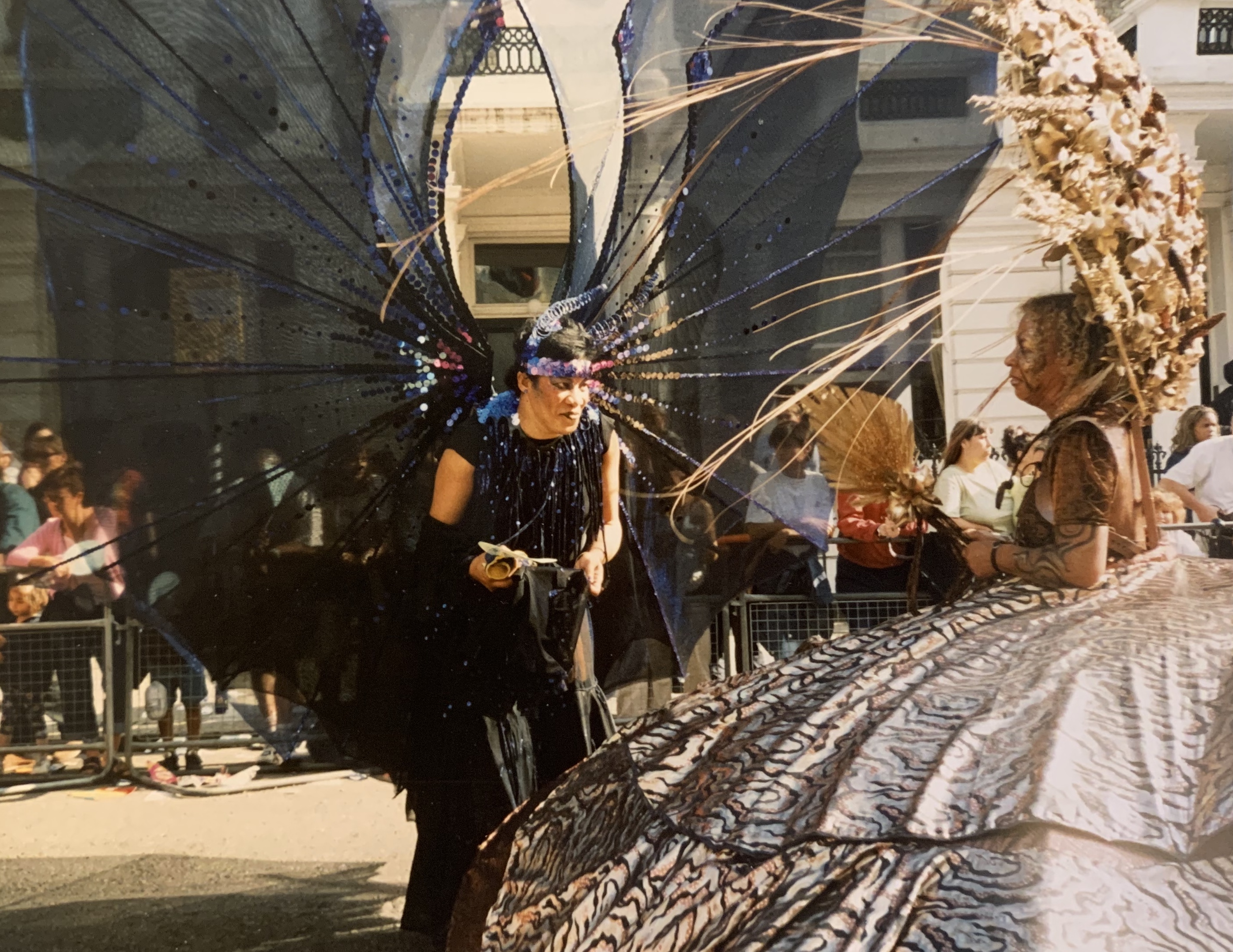 We now needed more help both with the admin and financial running of the band. Nikki bowed out and a new board was elected. The band now operated under the name South Connections and I met Joan Frances and we became co-bandleaders of the new South Connections – we were still based at the Ovalhouse.

In 1997 we were lucky to have a Trinidadian designer/Mas maker from Callaloo Company Michael Guy James work with us and he brought his Structural Engineer Murphy Winters. That year also saw mas maker and silk artist Ali Pretty and Ray Mahabir Trinidadian designer also involved in that year’s production. With all the help and skilled workers now at our disposal the band continued on a winning streak. Michael returned to Trinidad and Ali Pretty and Ray Mahabir Co-designed for us in 1998 and 1999. The combination of Ray and Ali who’s skill is silk painting and designs were very much in demand and we were thrilled to have both of them working together. The costumes were outstanding, yards and yards of hand painted silk swaying in the breeze at Notting Hill. All colours of the rainbow and mostly done by the women and men who were players in the band. 1998 and 1999 was the bands Call the Rain and Flight saw us winning top bands at NHC. 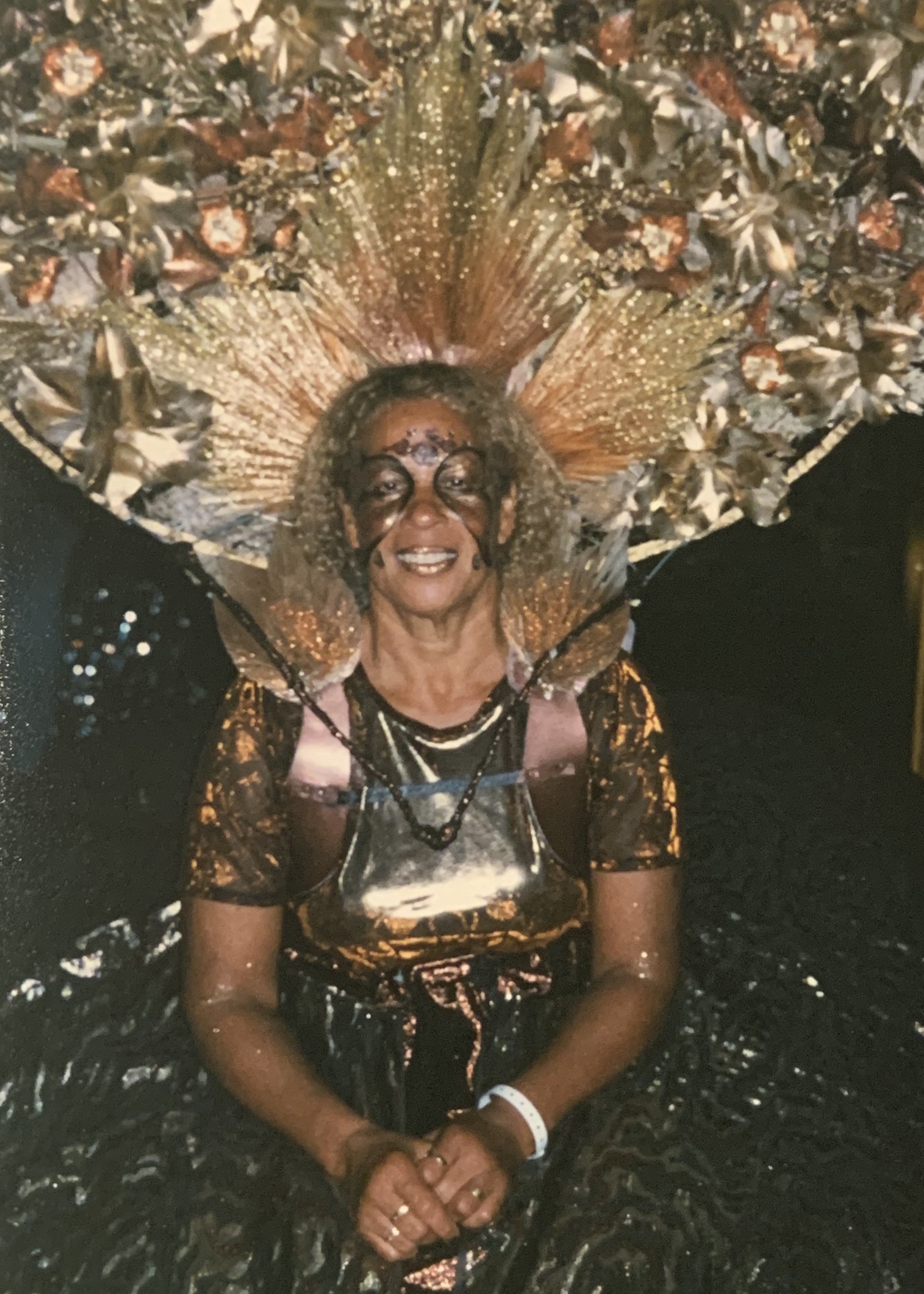 Ali Pretty decided she wanted to run her own band, working with the arts. Ray Mahabir took on the job of Designer, Mas Maker and Production Manager, and South Connection continued its run of success in being one of, if not the top, band in Notting Hill. Among his many individual pieces, Kings and Queens, males and female individuals, was an outstanding prize winner. I remember one of my costume “Mama La Terre” – the best female individual in his band Canboulay 2000.

South Connection became a major part of my live and Con, my children and grandchildren support me and took part in carnival. Taking the band to NHC was always a proud moment but then we had the opportunity to travel international with the costumes, which was both an achievement and a challenge for us because to we had to lay on carnival for the world to see and we had to do our best and this was a proud and enjoyable moment. For example the Queens Jubilee were part of the parade the theme was gold and lucky we had the year before the band Gangajal design by Ray Mahabir we were able to add gold materials and trims to fit in to the theme.

The costumes were of course a crucial part of us being elected to appear in overseas Carnivals and so we had invites to Doha (Qatar), Hong Kong, Northern Ireland and the Seychelles. These trips were special and thoroughly enjoyable.

As a matter of interest, the trip to Doha ended with a mad scramble to get everyone to leave Qatar and the gulf war was declared that day, We had to round up all the children, get them on board the first flight and then a dash for us to get on the last flight leaving admits the bombers taking off from where were stationed. It was scary but exciting to see them making their way across the gulf. We reached home safely. 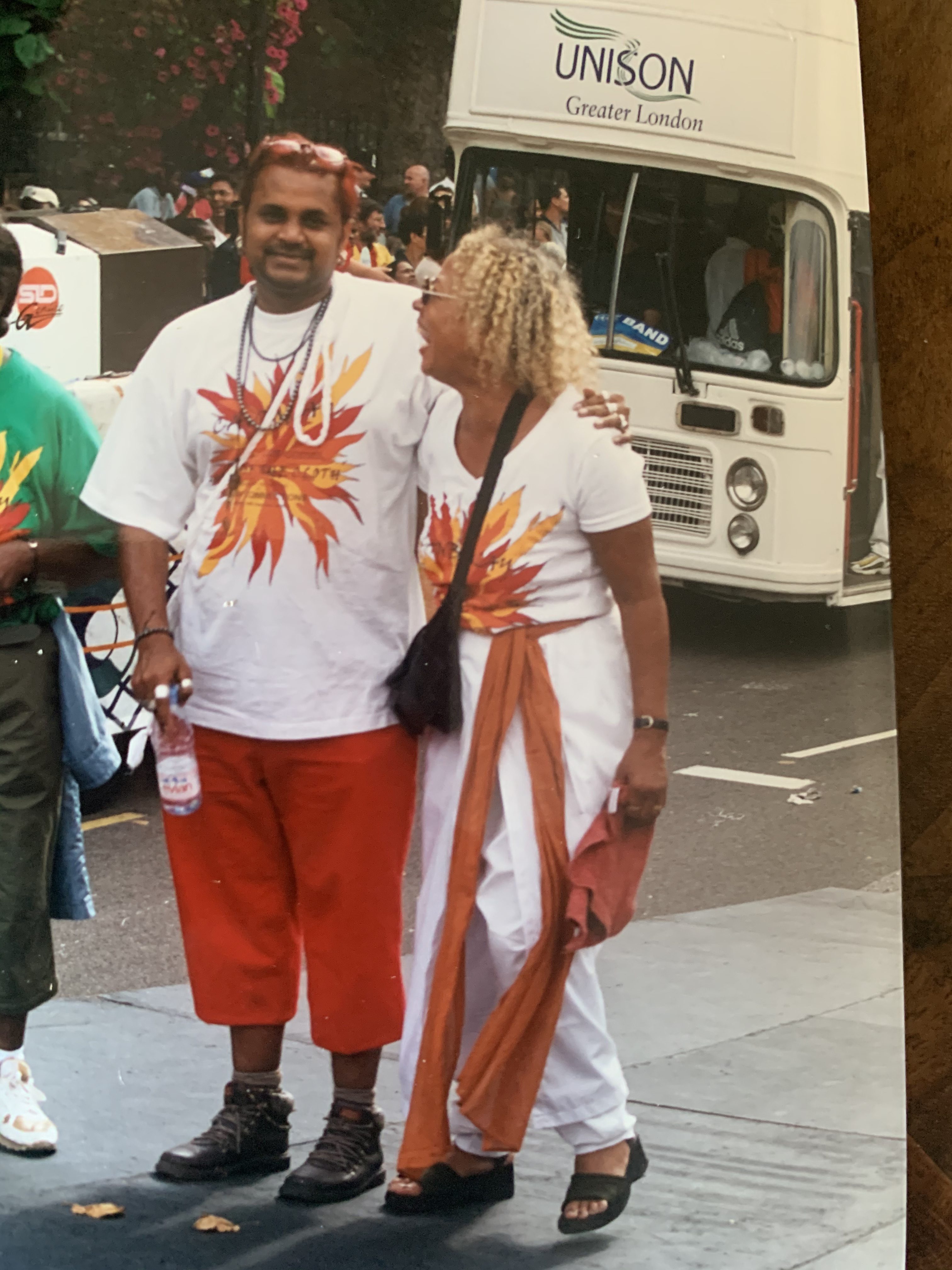 Ray and Avion in South Connections

Ray moved on to produce his own band working from a base in nearby Brixton and South Connection continued under a new designers. In 2006 my circumstances changed and I buried Conrad my husband – also a keen member of the committee and to some extent the driving force behind my involvement in carnival and the band. I felt I couldn’t carry on and stepped down as bandleader for South Connections. About a year later offered my services to Ray as I needed to feel useful in the carnival arena. I needed to work with a band just on a casual basis and Ray was pleased to have me.

Being part of carnival making remains with me in whatever capacity I am able to help and contribute. We must all do our part – for the good of the art of carnival. Its survival is important, especially for the next generation who have already had a taste of what carnival means.

With thanks to Avion for hand-writing out her story and sending it to us! we intend to exhibit all the work in April 2021 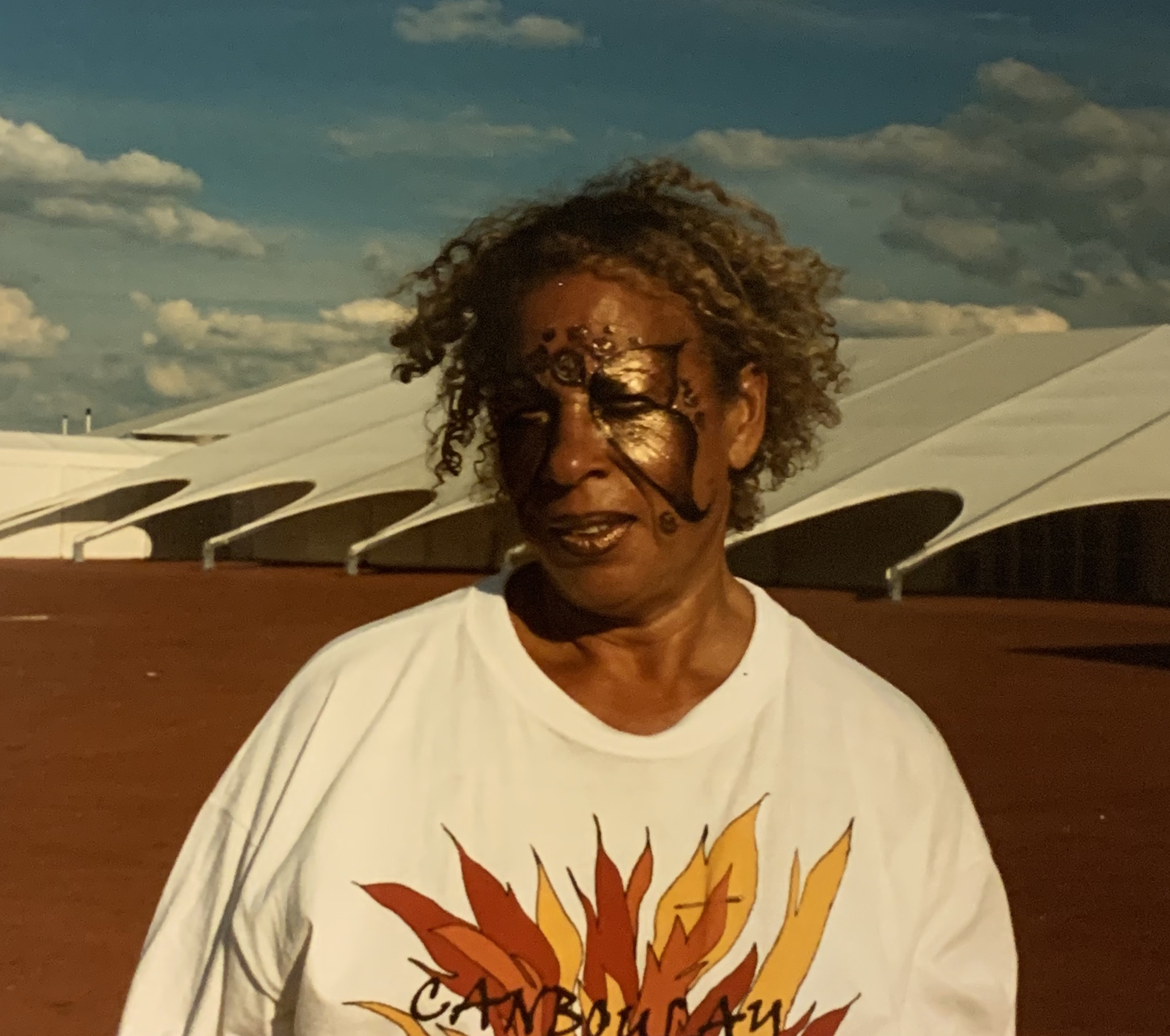 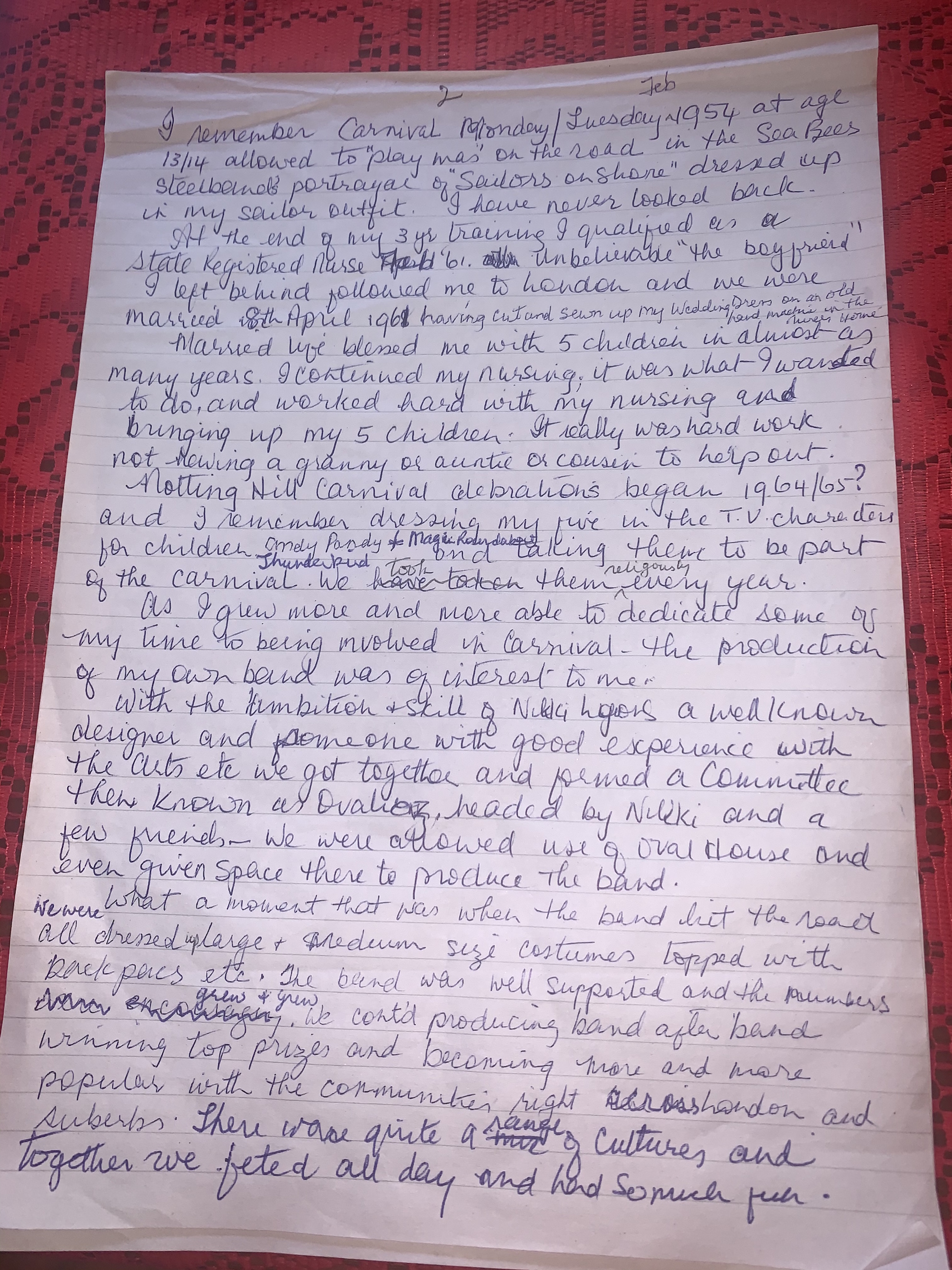 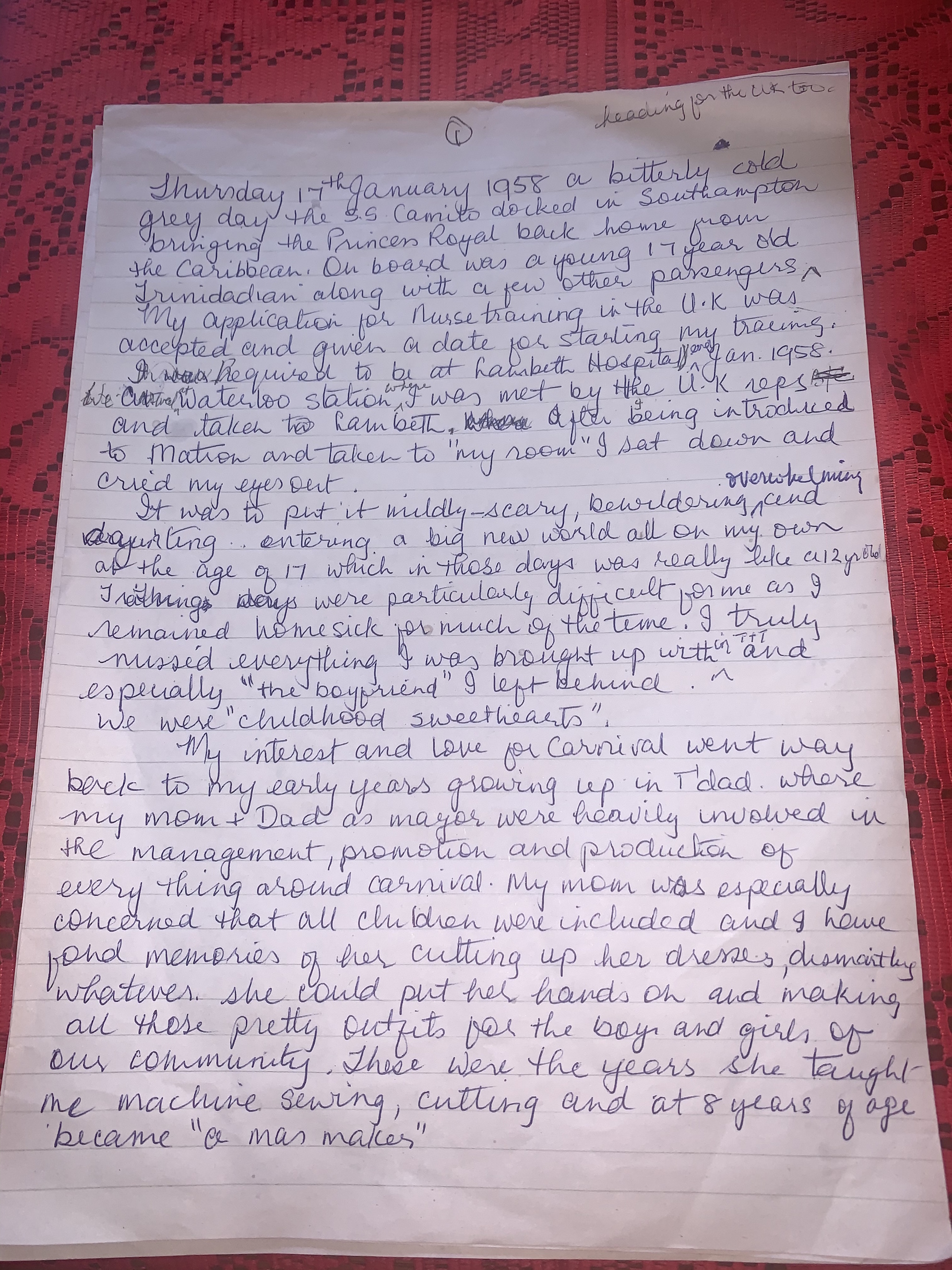 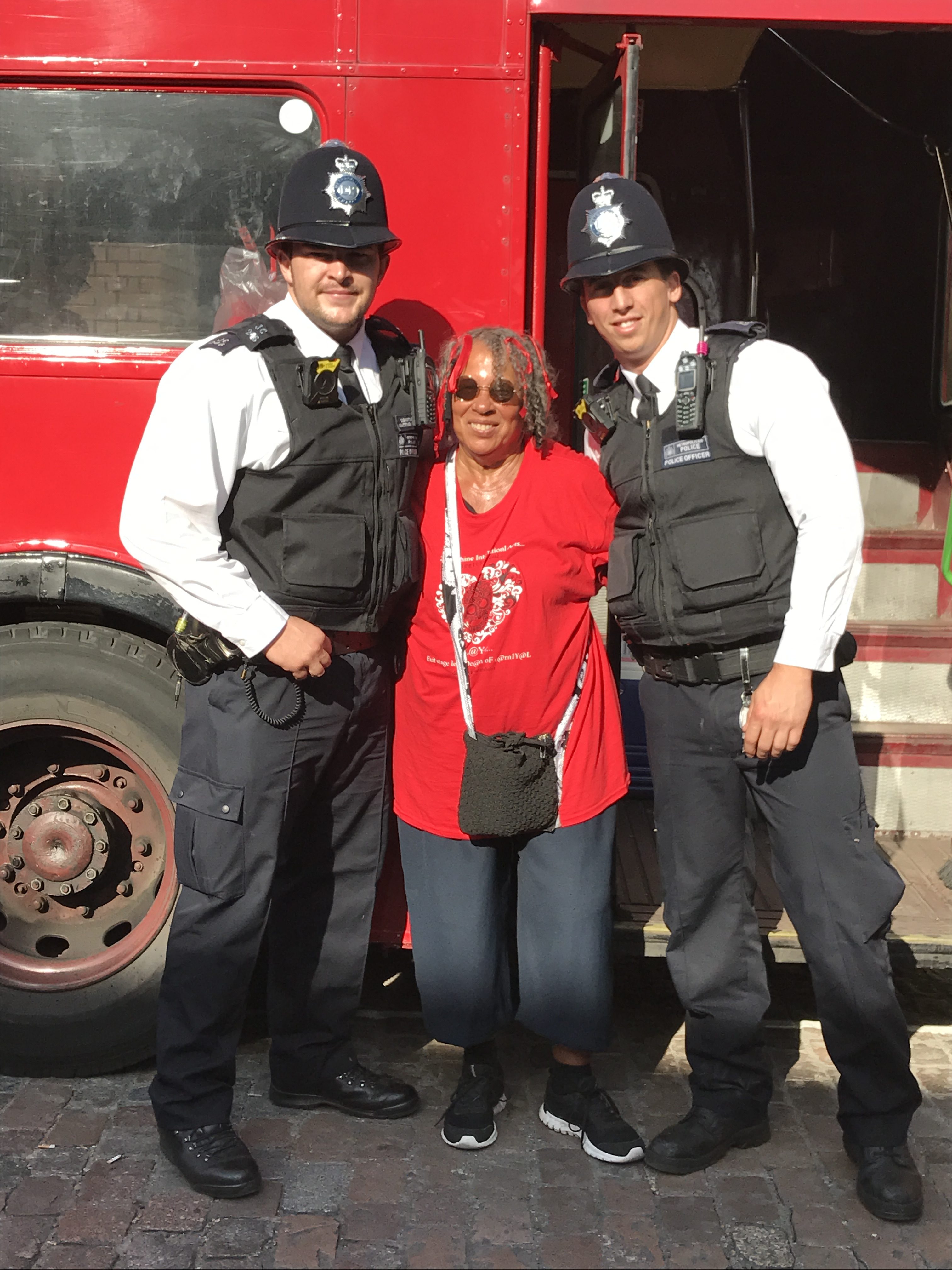