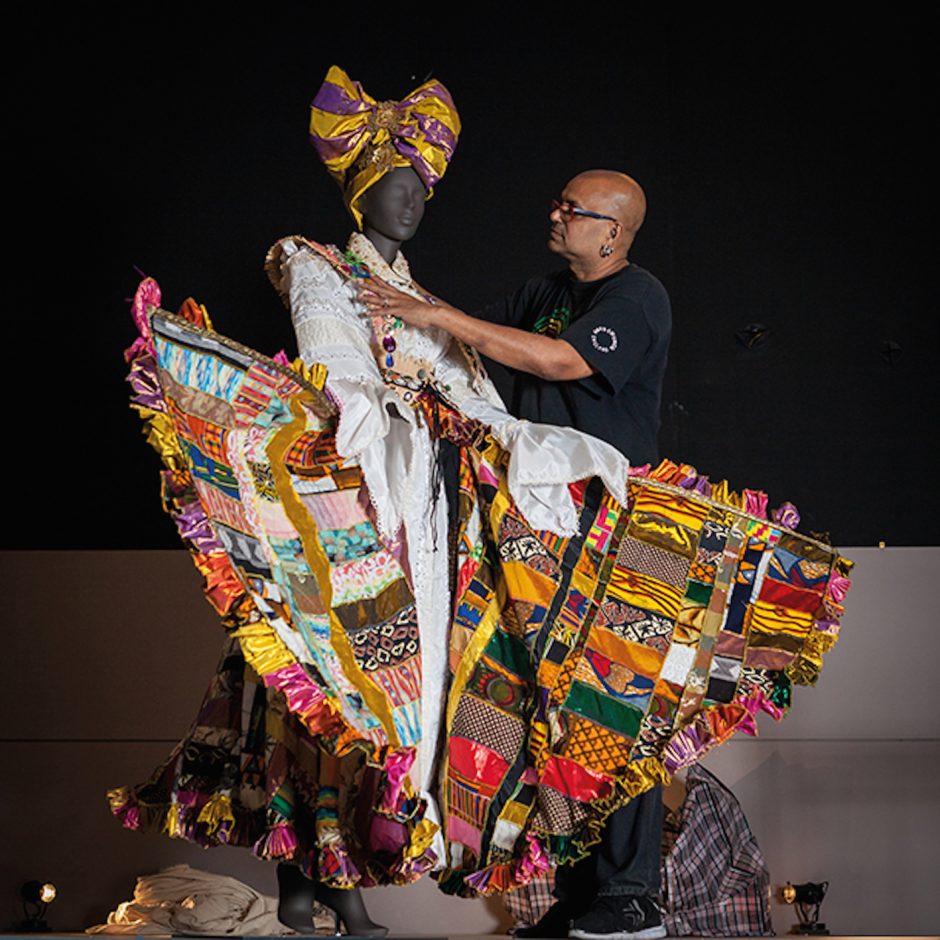 A journey through time, the Bele Costume by Ray Mahabir is indicative of Caribbean history, struggle, freedom and celebration.  The costume relates the cross-cultural rags-to-riches story of Carnival and inspires mental imagery of the Bel Air dance, culture and folklore through the ages.

The tale commences during the days of slavery when slaves imitated their masters in downplayed versions of “fetes”, where they mimicked the Minuet dances of the French Fetes held at the Great Houses of the plantations upon which they toiled daily.  This era is depicted by the tri-panelled skirt, describing a journey through the whirlwind dances and fascinating folklore of the slaves by blending African, Western and Caribbean Textiles.  The vibrant colours and detailed graphic prints throughout the costume guide the mind through the ages towards the epitome of contemporary Carnival culture – the rich adornment of beads and jewels depicting the truly celebratory atmosphere of the modern-day Carnival. 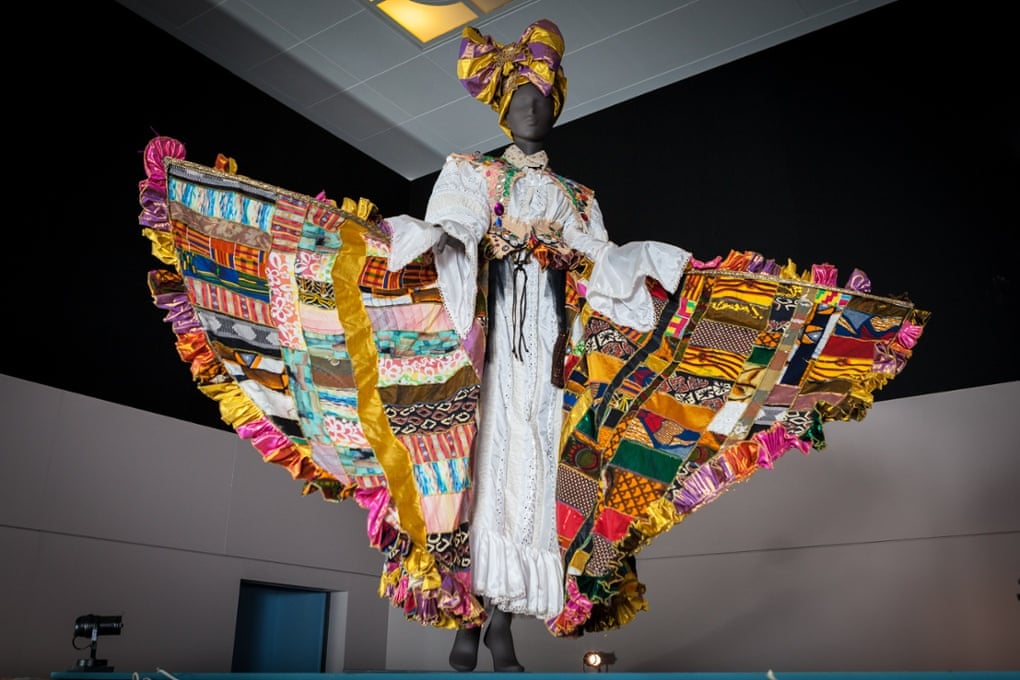 During the late 18th century when the French arrived in Trinidad and Tobago, they brought with them, not only a large entourage of African slaves but also their own life styles with a great deal of joie de vivre. Fetes were held in the plantation Great Houses, introducing the courtly dances of Europe, including the Minuet which was very popular at the time. The slaves who worked in and around these houses quickly copied the style and dress of their masters and mistresses, and, in their own fetes, they mimicked the dance, adapting and super-imposing gentle gliding steps with all the coquetry of the French. To these they added the drums of Africa, a spicy yet subtle sensuality which gave the Minuet a particular effervescent quality, a distinction of the peasant.

Ironically enough this exposure to rustic influences, placed the Minuet back among the folk with whom it originally belonged. This time, however, the folk were far removed from Europe and even the name of the dance was new. It became, the, Bele, called in Martinique, Guadeloupe, St. Lucia and Dominica. The Bele became widely known in other islands, with each island adding its own peculiarities. For example, in Tobago where there was a great deal of Congo influence, the Bele reflect very strongly the Congo overtones. In observing the dance in different Caribbean areas, it is not difficult for the researcher to note the predominating influence, such as the Yoruba Shango movements and even the Jig from Tobago. 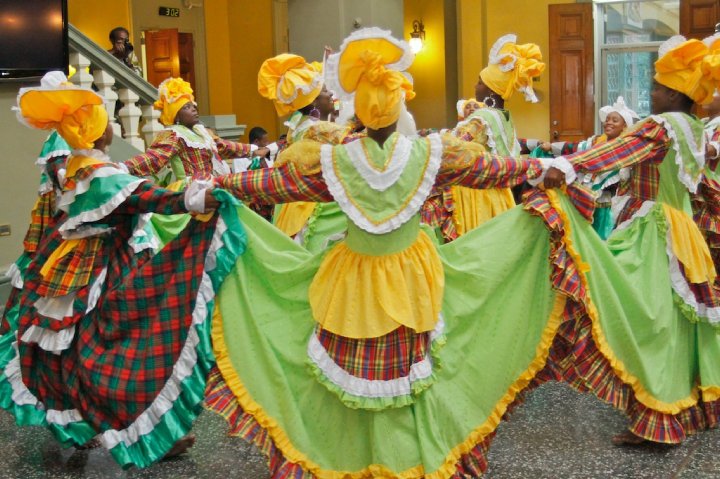 For accompaniment the dance employs the use of three traditional skin drums, two Fulas and one cutter or lead drum. The drummers are usually well versed in their art and the cutter drummer takes pride in his improvisations, while the fula players maintain the basic rhythm. Shac-shacs are played by the Chantuelle and others, and the chorus of singers, some of whom are also dancers, dictate the style and tempo depending on the songs chosen. Some songs sung in Patois or dialect are in 2/4 time and others in ¾ or waltz, 4/4 and 6/8. This wide range enables the dancers to create many refreshing variations in their movements.

Costumes consist of a bright plaid or flowered material which is made into a long dress with fully gathered skirt, attached a bodice with long sleeves. This is tucked up over a long, white stiffly starched cotton petticoat, richly embellished with lace and edgings. The dress which dates back to the 18th century is called a Douietter. A Foulard or neck scarf of contrasting colour is used, and in typical West African style a brilliant plaid or flowered headtie called a Madras is tied attractively in a high fashion with ends either standing out in peaks or tucked in. This Madras plaid which is widely used today in the Rivers and Cross River states of Nigeria, is so named after the area from which it is imported-Madras in India. 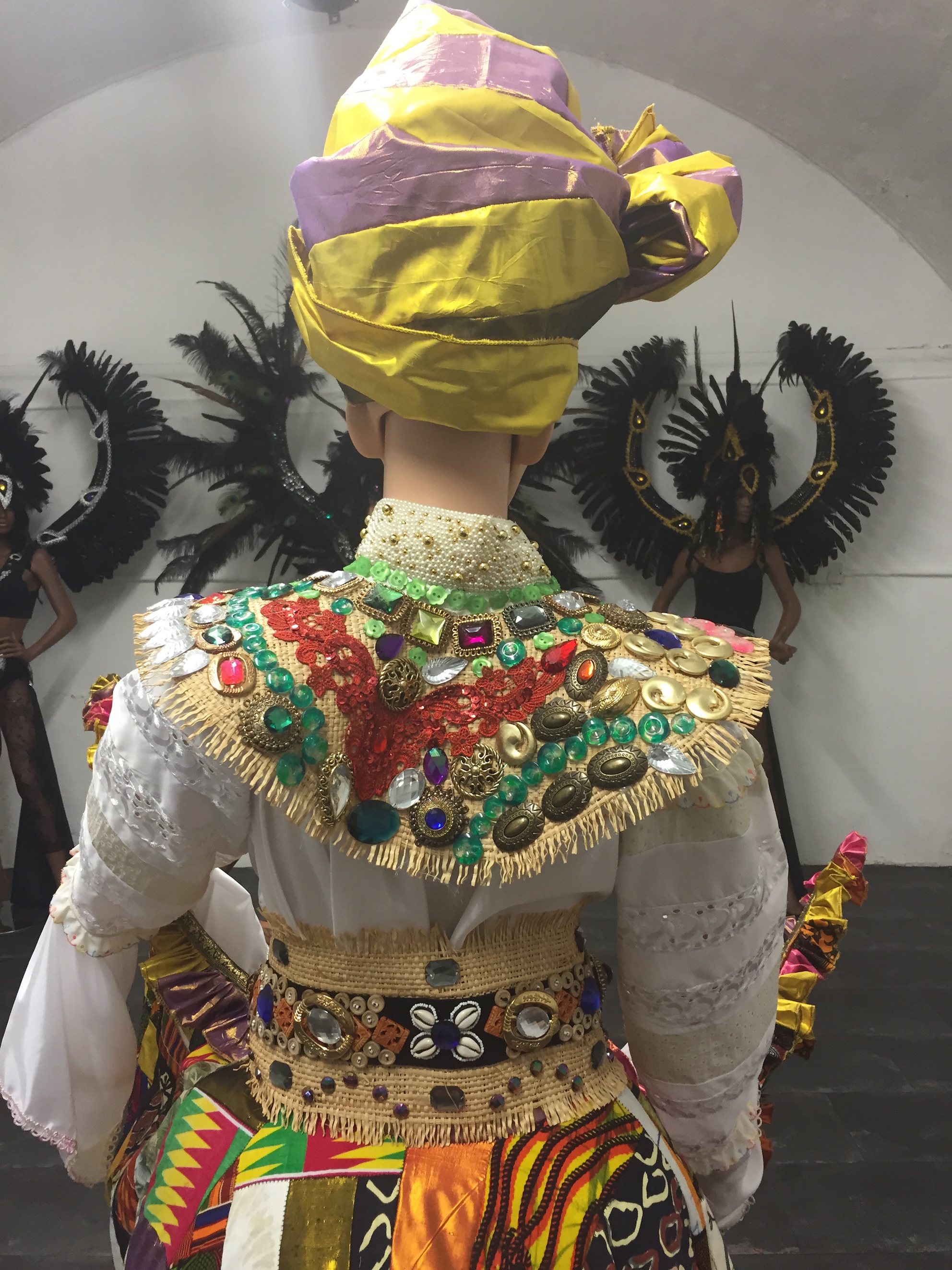 Close-Up of the Detail in Ray’s Bele Costume

On the feet are worn backless slippers, and a delicate handkerchief called a “mouchoir” or d a fan is carried to accentuate flirtatiousness in the dance. Large hoop earrings-pends oreilles and several strings of beads or chains of costume jewellery complete the ensemble. Long ago, heavy pendants were to be seen suspended on long chains, all of solid gold.

The men on the other hand, wear simple trousers and long sleeved shirts, white or coloured, with brilliantly coloured scarves around their necks and waists. In times past however, it was not uncommon to see tailcoats or waistcoats on special occasions.

The Bele which is usually danced on and around public holidays in the atmosphere of a rural fete takes place in the middle of a tent which is usually constructed for the purpose. The drummers sit at one end and the dancer’s mill around, waiting for the fete to begin. The women in particular are the centre of attraction and each takes turns moving to the centre of the floor for her grand performance.

A male dancer introduces the female and she takes the ends of her skirt in hand and sweeps the floor with a grand flourish. Communicating with the drummers, she travels with a heel and toe movement with the right foot, while the left glides on the floor and changes to the other side; then moving with a slight shake of the hips she travels right and left with bent over torso, straightening at the end if the phrase. She turns flirtatiously right and left, looking over her shoulder with a slight hopping movement, then flicking her skirt parallel with the IRO or wrapper of the Yoruba woman of Nigeria. The constant wrapping and unwrapping can be seen to have definite flirtatious and sensual connotations. These and other movements to feminine, are placed in the distinct category called “fine style” and are executed very gratefully as each dancer tries outdo the other. Sometimes they move in a group on the floor, with the men competing for attention. The men acts as foils for the women, and while the women are coquettish and feminine, the men are virile and agile. They use strong and intricate movements with fast footwork, hands spread out as a male Bird of Paradise in his mating dance.

In the Grand Bele, men and women are paired off, usually in couples of four. They make several figures based on the basic movements but including grand bows and points in a manner of reminiscent of the Quadrille. Lots of laughter, vivacity and strong sensuality pervade the air-Bel Air. Whirling figures in dazzling colours, contrasted with frothy, billowing white petticoats, heady perfumes and glittering jewellery all add up to the beauty that is the Folk.

To signal at the end of a dance, if the woman’s partner is not on hand to hand guide her back of the sidelines on sensing her tiredness, she then moves in to the drummers and places her hands on the drum. This gesture has several variations including one where a woman of extrovert personality may swirl and lift a foot with grand style, bringing it to rest on the drum. The best female is called “La Reine”-the Queen, and every village has its own La Reine.

From the book : Golden Heritage -The Dance of Trinidad and Tobago by Molly Ahye 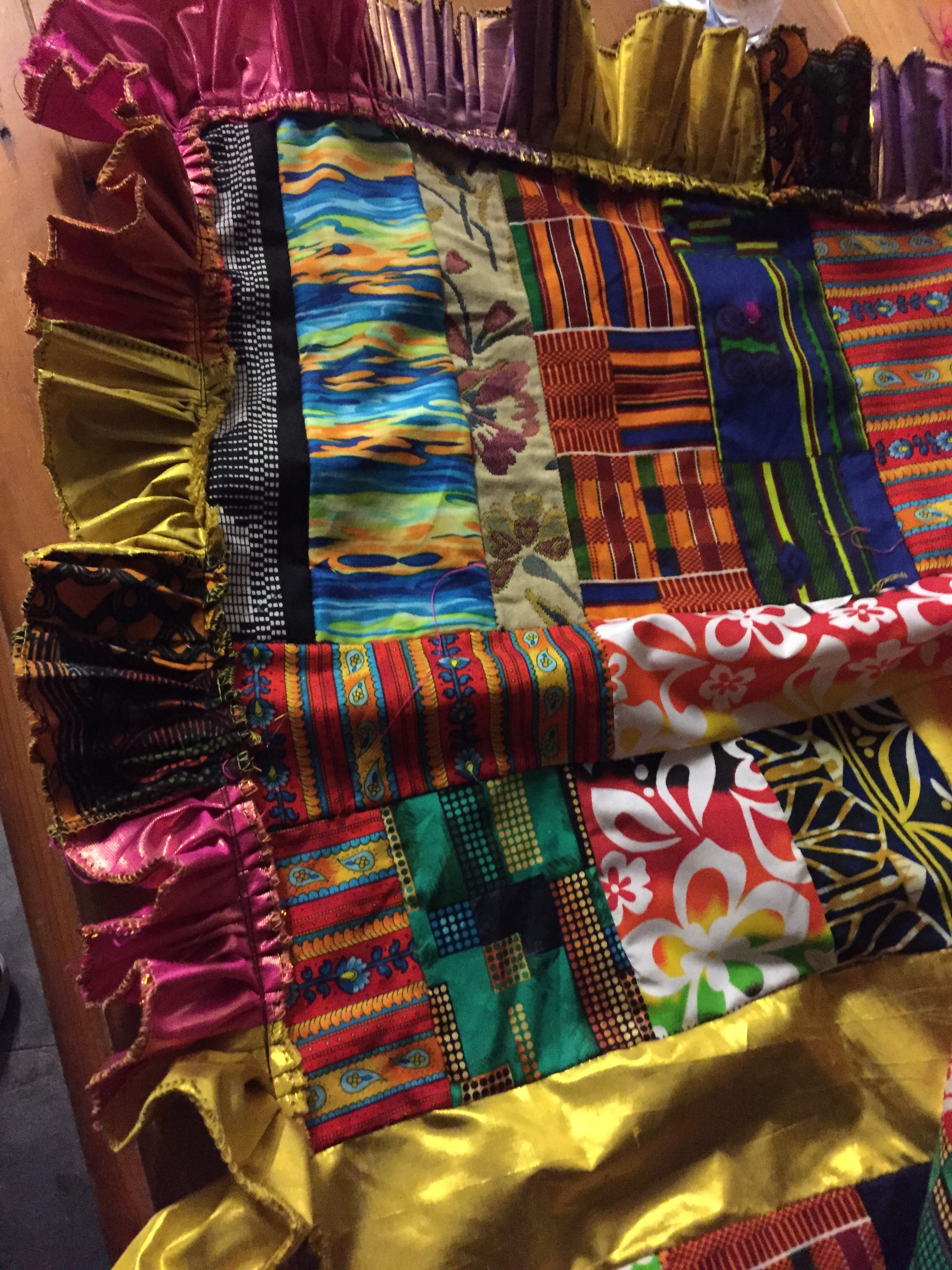 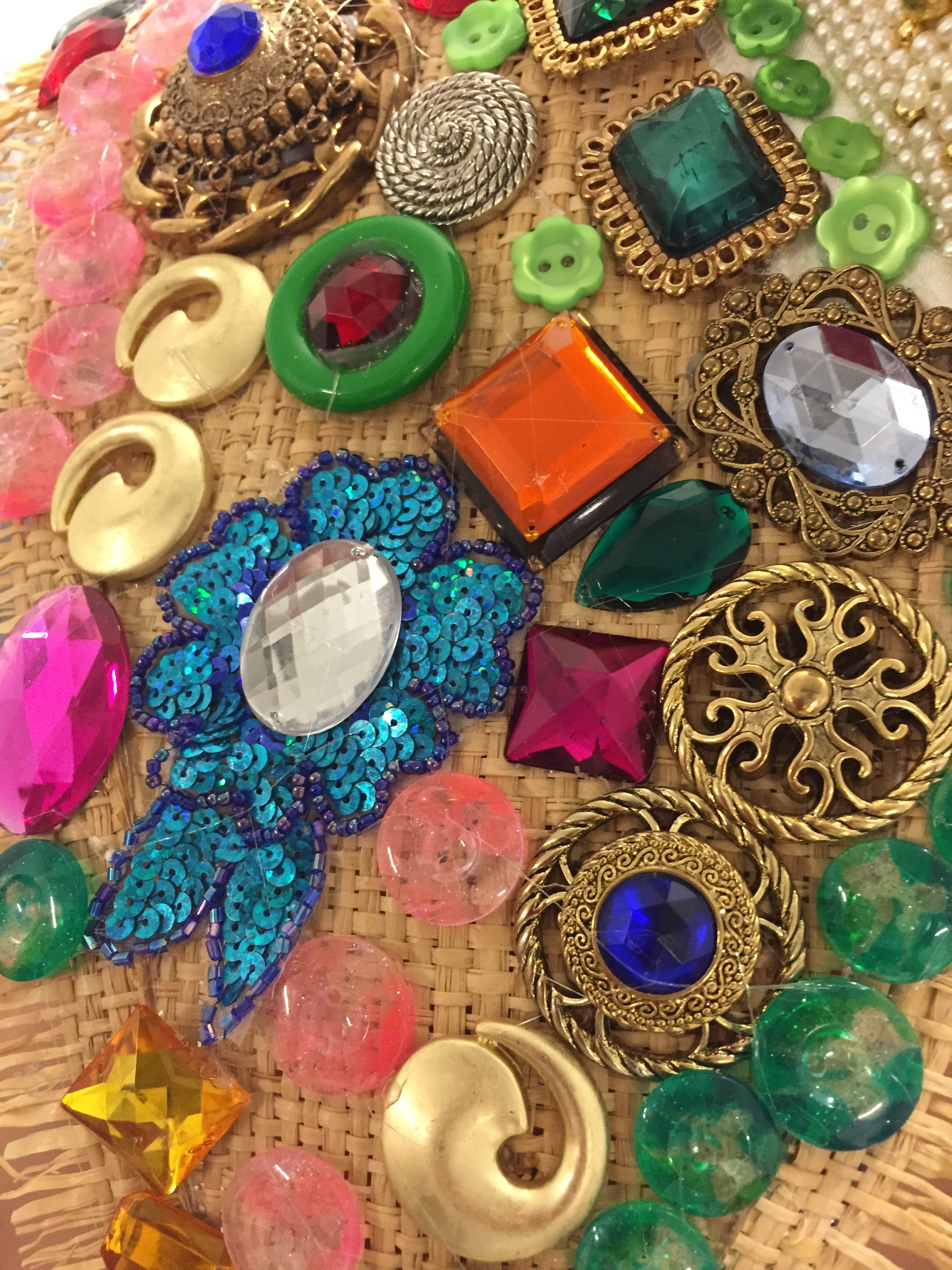 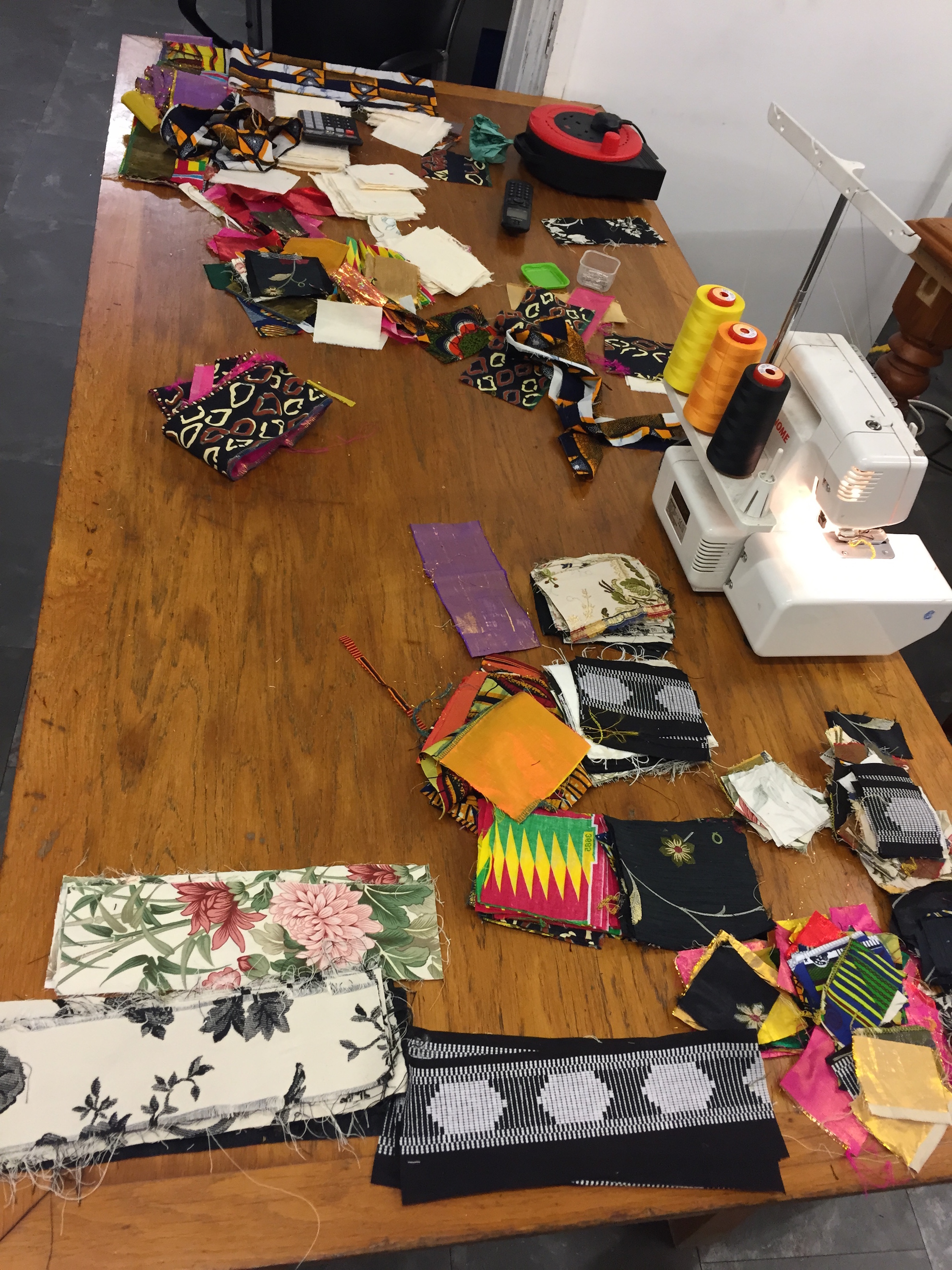 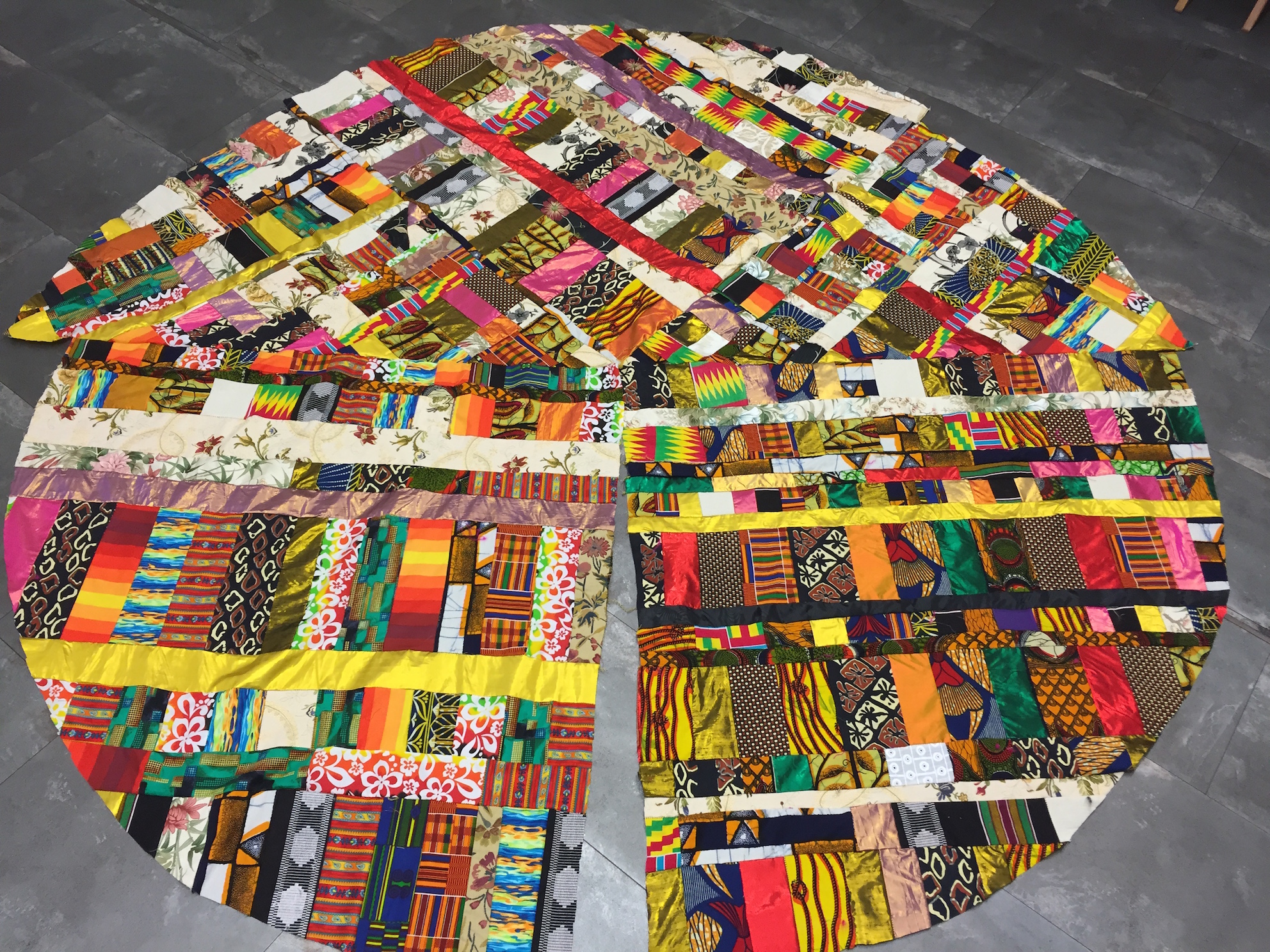