We were recently interviewed by the lovely people at BrixtonBlog.com. Here’s the full story – or you can read it on their website here. 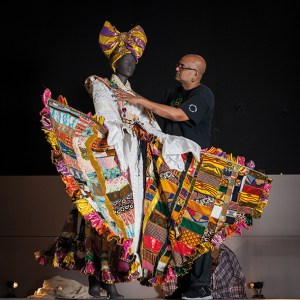 Brixton-based designer Ray Mahabir with his costume commisioned by the British Library. Photo by Toby Keane

Already an esteemed carnival costume designer, Ray’s intricate costume doesn’t disappoint in terms of either flamboyance or rich multi-cultural significance. Marrying folk and carnival history, his costume is loosely based on the tradition of Bele or Bel Air, a drum dance and song closely linked to Caribbean history and a Douietter, an 18th Century dress with a stiffly starched white cotton petticoat, richly embellished with lace and edgings. The bespoke creation took no less than two weeks to make and comprises different elements and fabrics from African, European and Caribbean traditions. 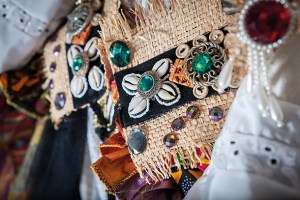 Ray created the costume with the help of two assistants in his studio under the railway arches in Loughborough Junction where he also runs a café (C.A.F.E – which stands for Carnival Arts for Everyone) and holds one-to-one sewing workshops. Ray described his enthusiasm for what he does, whether it’s for the British Library or with local people during a workshop: “I’m passionate about what I do, how I do it and where I do it. When you come to C.A.F.E, I can guarantee you an informal and pleasant experience and I can chat with you about food, culture, art, carnival and much more!”

Ray originally worked as a self-trained fashion designer and draws inspiration not only from his personal heritage, but also from his surroundings: “[Brixton] exposes me to such a diverse mix of cultures. I especially find inspiration in its markets…from the more traditional food markets to the more creative art markets and even to the modern concept of Pop Brixton! In every market and around every corner in Brixton, there is such a variety of friendly people ready to interact with and gain inspiration from, whether they are the traders or fellow customers.” 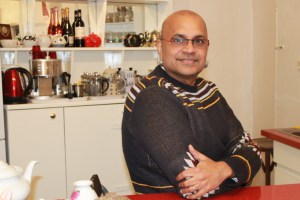 A huge advocate for the Loughborough Junction community, Ray describes the area as his “new village” comparable in community spirit with the small village of Penal, South Trinidad which he grew up in. “The very essence of the railway arches and the personality of the Junction is such an inspiration…with the promises of gentrification looming over Loughborough Junction, I am proud to say that I run a cultural community arts centre for the local residents that is unique and that celebrates carnival – and [it’s] not going anywhere.”

Ray Mahabir’s carnival costume will be on display at the British Library from Friday 16 October – Tuesday 16 February, for opening hours and admission prices head to www.bl.uk/west-africa-exhibition. To book a workshop with Ray, visit www.sunshineiarts.co.uk.